Broadleaf weeds are the prime culprit of lawn invasions. They can turn a manicured lawn into a nightmare zone, with bald patches, wilting weeds, and nutrient-deprived grass. If your yard is being overtaken by broadleaf weeds, it’s easy to see why you want to remove these pest plants.

The negative impacts of broadleaf weeds include the following:

With the information in this article detailing broadleaf weed species and tips on how to kill broadleaf weeds, you’ll be able to choose the plan of action you need to reclaim and protect your lawn and garden. 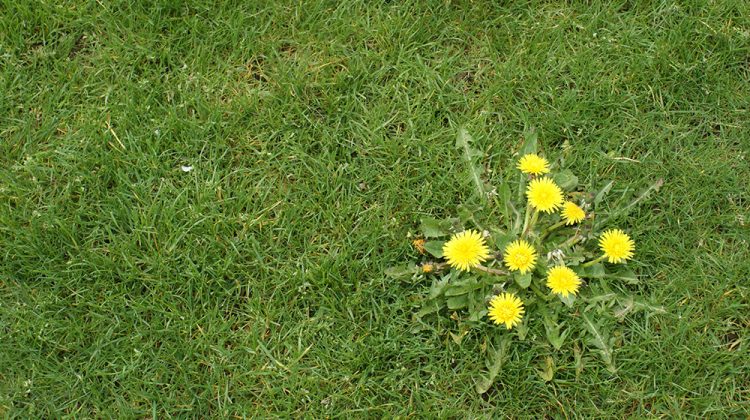 What are Broadleaf Weeds?

The term “broadleaf weed” applies to a large number of plant species. Some common examples are dandelions, clover, chickweed, and ground ivy.

The broadleaf weed definition is, in short, a weed that is not part of the grass family. Proper identification is important because the herbicides and tactics used for controlling broadleaf weeds can be very different from those used against invasive grasses. What works to kill broadleaf weeds may not kill grassy weeds and vice-versa.

There are some relatively simple ways to determine whether broadleaf weeds or grassy weeds are overtaking your yard.

With so many different weed species within the broadleaf family, it might seem like an impossible task to identify exactly what sort of weeds are invading your lawn and garden.

One helpful tool for identifying unknown plants is the plant identification app, PlantSnap. Using a picture you take, the app will attempt to identify the plant you’ve encountered. It’s free and available for Apple and Android devices.

Perennial broadleaf weeds are weeds that live for more than two years. Because weeds in this category have the longest life cycle, they can become a long term menace.

Perennials are extremely invasive because many species not only spread through flowering and seeding, but also through invasive root systems and creeping rhizomes. Because of their large and sprawling roots, perennial weeds are extremely difficult to remove by digging.

Annual broadleaf weeds live for only one year or one season. However, in this time they produce large amounts of seeds, sowing the means for a return the following year.

Because annual plants are so short-lived, they generally do not possess complex root structures, making them much easier to dig and remove by hand than other weed types. Additionally, pre-emergent herbicides can be used to prevent annual weeds from sprouting.

Biennial broadleaf weeds are much rarer than perennial or annual varieties. Biennial plants require two years to complete their life cycle. In the first year, they may seem relatively small and unobtrusive as they grow low to the ground. Most of the growing energy within the first year is spent toward establishing strong root systems.

Following the first winter, biennial weeds “bolt” and grow much larger to flower before finally wilting and dying, much like annual weeds. Although relatively rare, they cannot be treated quite the same as their annual cousins.

5 Most Common Types of Broadleaf Weeds

Dandelions are a hardy perennial weed found in all regions of North America. Because dandelions have a deep taproot, removal can be especially difficult. If any portion of the root breaks and remains in the soil, the dandelion can resprout. Additionally, dandelions flower aggressively and spread their fuzzy, white seeds over large areas.

Removal: Dandelions are best removed through use of herbicides designed to kill broadleaf weeds. 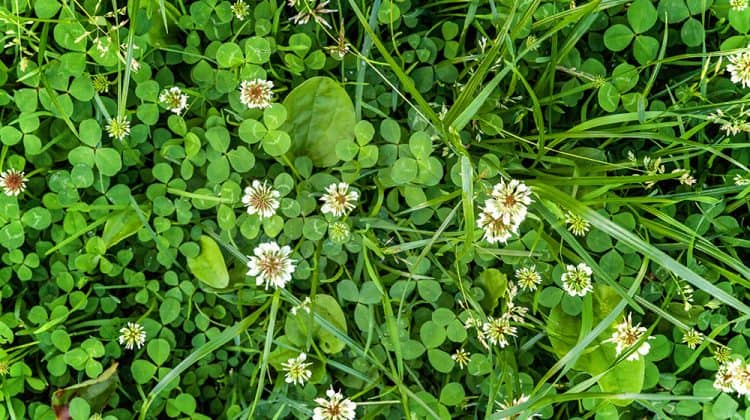 While clover is generally a perennial plant that spreads across a yard by shooting runners and conquering large areas, in regions that regularly experience drought, clover can exist as an annual plant. This is due to the fact that clover flowers produce a large number of seeds.

Removal: Check out our comprehensive guide on how to get rid of clover for more info. 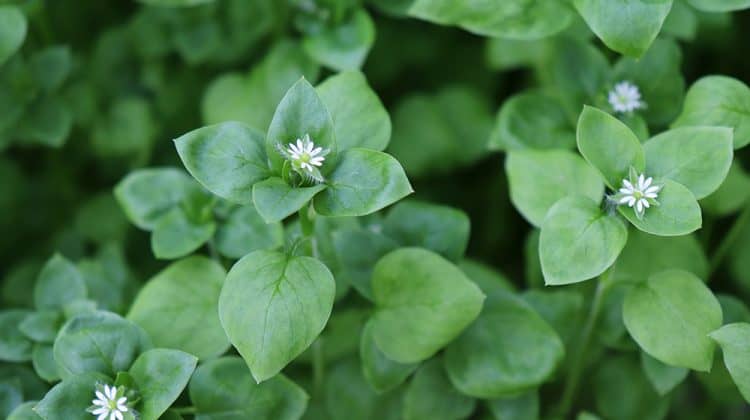 A harbor for many pest insects and plant diseases, chickweed is one of the most common and invasive summer annuals. Because it sprouts in late spring or early summer, it might not be eradicated by traditional spring-and-fall herbicide applications. 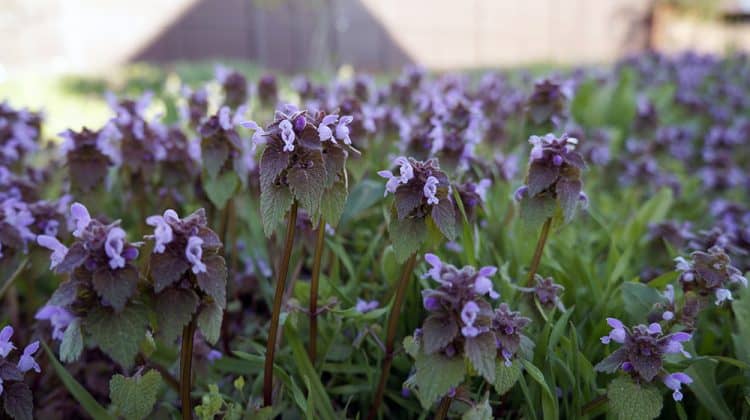 An invasive perennial European species, ground ivy takes root in shaded areas of lawns, often finding a home in hard-to-mow places such as between the roots of large trees. Not only is ground ivy hard to remove because its rhizomes allow it to spread and take root almost anywhere, its waxy leaves often protect it from herbicides. 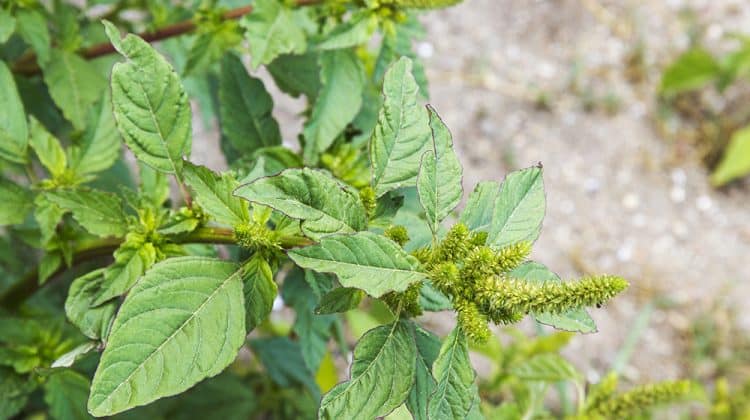 An aggressive summer annual, pigweed consistently sprouts in yards and gardens. In addition to choking out other plant life, pigweed pollen is a well-known irritant to anyone who suffers from pollen allergies. The plant appears in several varieties and across many habitats

Removal: Both pre-emergent herbicides and weed-killing herbicides are effective ways to remove Pigweed.

Because broadleaf weeds are so tenacious and come in many different varieties, there are several ways to get rid of the broadleaf weeds in your lawn. Whether it’s stopping perennial weeds in their tracks or preventing summer annuals from sprouting, there is a broadleaf weed control method for every type you encounter.

How to Get Rid of Broadleaf Weeds

Determine the Scale of the Broadleaf Weed Invasion

If you have noticed a few weeds appearing in your lawn, at seams in the pavement, and in your flowerbeds, the best broadleaf weed killer may be a spot-treatment spray. These sprays are meant to kill weeds within a few weeks following application. As with any herbicide, be careful to make sure garden plants are not exposed to the herbicide, as it may damage or kill desirable plants as well.

If, on the other hand, your lawn is being overtaken by a mass of clover, or if wild violets are distributed among your grass, a large-scale broadleaf weed killer for lawns is what you need. The following tips are focused on ridding any size lawn of broadleaf weeds.

The three best herbicides for broadleaf control are:

When applying broadleaf herbicide for lawns, the best time to do so is in the fall. Apply herbicide between mid-September and early-November. This is when perennial weeds such as dandelions gather the nutrients they need to survive their period of winter dormancy. By applying herbicide in fall, you ensure the weeds absorb the herbicide in the soil, destroying them at the root.

The second-best time to apply herbicides is just when weeds begin to flower, typically between late-May through late-June. Weeds are generally more vulnerable at this point in their life cycle and herbicide is more likely to kill broadleaf weeds.

Summer annual weeds such as chickweed and purslane are very difficult to control because different species sprout at different times in spring and summer. Many annual broadleaf weeds mature very quickly. While an application of traditional broadleaf herbicide in late-May might control some of these weeds, any plants that have not sprouted will remain unaffected.

The best broadleaf weed killer for annual weeds is to apply a pre-emergent herbicide containing isoxaben in April. This herbicide will prevent broadleaf seeds from germinating, preventing the need for their removal, and keeping your lawn weed-free all summer.

Some things to keep in mind when using pre-emergent herbicides:

Apply Herbicides Under the Right Conditions

Herbicides do their best work when they:

To ensure the broadleaf killers you apply to your lawn do their best work, apply herbicide on a damp morning. Alternatively, lightly water your lawn before application. This will cause herbicides to cling to weeds and draw the weed killer into the soil to attack root systems.

If you want to avoid using chemicals when treating your lawn for weeds, consider spot-treating weeds with a mix containing vinegar and dish soap, or one of several organic weed killers on the market. One thing to note with any weed killer containing vinegar or any organic “Weed and Grass” killers is that they will kill any and all plants, including desirable grass.

There are several natural selective weed killers on the market, such as iron-based broadleaf herbicides including Fiesta and Iron-X. Additionally, A.D.I.O.S. is a selective broadleaf killer that attacks weed root systems. Each of these natural options will help rid your lawn of any emergent weeds.

A single female pigweed plant can produce hundreds of thousands of seeds if allowed to bloom. These seeds can lie dormant in the soil, only to sprout the following spring, turning your yard into a weed-infested landscape.

An effective broadleaf weed killer is to make sure the plants do not flower. Mow flowering weeds in your yard, such as dandelions and wild violets before they seed. When it comes to weeds that appear in flowerbeds, such as thistles and chickweed, remove the weeds by digging or through the use of a string trimmer. If you prevent broadleaf weeds from flowering, you stop next year’s invasion before it begins.

Broadleaf weeds are tenacious. To keep your lawn weed-free, bag, and trash weeds that have been pulled. If you plan to use the weeds for compost, bury them at least one foot deep in any compost pile to ensure the weeds decompose.

The reason it is important to get rid of weeds is due to the fact any flowering weeds may still release seeds after they are killed or pulled from the soil.

One of the best ways to keep your lawn broadleaf-free is to ensure your lawn’s health. A thick, well-groomed lawn with healthy grasses presents fewer opportunities for weeds to sprout. Bare patches and sickly grass are easy prey for broadleaf invaders.

By fertilizing your lawn, or using a Weed & Feed product in spring and fall, you promote lawn health and keep weeds out. When mowing use a moderate-to-high mowing height to ensure the best health of your grass. Mowing at a low height will allow more light to reach low-growing weed species such as clover, encouraging them to take over your yard.

By identifying the weed species common to your region and your lawn, you can choose a broadleaf control strategy that works best for you. In areas beset by summer annual weeds, a pre-emergent herbicide may be all you need, while large scale invasion by perennials might require a herbicide-and-fertilizer attack that destroys weeds and encourages the growth of an impenetrable, healthy lawn. 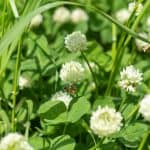 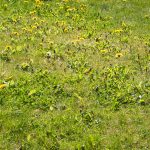