Don’t spread compost on top of mulch. Exposure to sunlight will destroy the natural sources of nitrogen in organic compost. Plus, weeds will sprout in compost spread on top of mulch. It’s much better to rake mulch aside and spread compost directly on the soil. Then, cover the compost with mulch. This way, the mulch will protect the compost as it works its way into your soil to feed your plants.

Mulch vs. Compost: What’s the Difference?

Mulch and compost are two very different gardening essentials with different purposes. Mulch is primarily used to insulate the soil and suppress weeds. A layer of mulch keeps soil moisture and temperature at steady levels. It prevents soil from drying out quickly after watering and protects plants from cold nights. A 3–4-inch (7.5–10 cm) layer of mulch also smothers weed seeds that try to sprout in your garden.

Compost is a fertilizer. It is made up of organic matter that feeds your soil with nutrients. Its main purpose is to introduce key ingredients to your soil and to boost the population of healthy soil microbes. It isn’t meant to insulate plants or stop weeds from growing. So, mulch and compost are very different compounds with different purposes.

Can You Use Mulch and Compost Together?

Mulch and compost make an excellent combination. By starting with a layer of compost to feed the soil, you’re fertilizing your garden. A layer of mulch on top of compost prevents weeds from taking advantage of this fertile soil and sprouting in your compost. Mulch over compost will also help retain soil moisture, which helps pull the nutrients in compost deep into the soil. This mulch-over-compost combination will feed plant roots without allowing your soil nutrients to be stolen by weeds.

Another benefit of putting mulch on top of compost is that mulch protects compost from sun damage. Most of the plant-feeding nitrogen in compost comes from urea, a natural substance found in composted manure. Unfortunately, urea breaks down when exposed to sunlight. So, if your compost isn’t mixed into the soil and/or protected by a layer of mulch, the sunlight will bake all the soil nutrients out of your compost. Spreading mulch over compost helps retain soil nutrients.

What Happens if You Put Compost on Top of Mulch?

Compost on top of mulch is likely to result in a bloom of fast-growing weeds, followed by a gradual withering as the sun bakes the nutrients out of your compost. Compost is extremely fertile, making it a great material for seeds to start in. A layer of compost on top of mulch is likely to be taken over by the fastest-sprouting seeds of all—weed seeds. Any seeds blown onto your compost layer will sprout up quickly and begin stealing nutrients from the compost before it begins feeding your plants’ roots.

The second thing that will happen if you put compost on top of mulch is that prolonged exposure to sunlight will destroy the nitrogen-carrying urea in your compost. This means that the helpful nutrients in compost will either be stolen by weed seeds or evaporated by the sun before they ever feed your plants. Even the weeds that sprouted in your compost may wither and die once the compost loses all its benefits.

Do You Need to Remove Mulch Before Adding Compost?

It is essential to remove the mulch in your garden before you add compost. However, removing mulch doesn’t have to be backbreaking labor. Rather than shovel out all the mulch, you can simply rake a section of mulch aside, add compost to the soil, and then rake the mulch back over the compost.

In large vegetable gardens that must be replanted yearly, it’s a good idea to add compost before planting. This gives you the opportunity to mix the compost into the top 6 inches (15 cm) of soil without disturbing existing plants. You can combine backyard garden winter cover crops with spring composting to really give your garden a boost. Then, add a few inches of mulch on top of the compost and your garden is ready for planting.

How Do You Add Compost to a Mulched Garden?

If you want to add compost to a mulched garden, it’s important to temporarily remove the mulch first. This ensures your compost makes direct contact with the soil, which allows it to add organic matter and fuel plant growth in your garden beds. Here’s how to add compost if your garden already has mulch:

You can use whatever mulch you wish. Mulches made of organic materials—such as pine needles, bark mulch, wood chips, cocoa hulls, and straw—can be found at most garden centers. If you prefer, you can use gravel, rocks, or recycled rubber mulch. No matter what mulch you use, it will protect your compost and allow it to feed your plant roots.

Should You Spread Compost Over Mulch?

You should never spread compost on top of mulch for the following reasons:

Instead, make sure your compost is protected. A layer of mulch will prevent the sun from evaporating the nitrogen-containing urea in compost. Mulch will also help retain soil moisture, which will assist in drawing the nutrients in compost deep into the soil. Mulch and compost make an excellent combo as long as mulch is spread on top of compost. 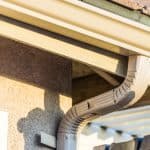 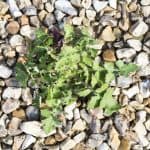