Never use diesel as an alternative to weed killer, such as Roundup. It is illegal to spray diesel outdoors and it is extremely toxic to the environment. Diesel poisons the ground and enters the water supply, where it is not removed by regular water treatment processes. This can create a risk to human health. Although Roundup has been involved in safety controversy, diesel is proven to be harmful to both humans and the environment. It is never safe or advisable to use diesel to kill plants.

Why Should You Never Use Diesel to Kill Weeds?

It is illegal to use diesel as a weed killer in the United States and most other countries. Spraying diesel on plants is considered illegal dumping, which is punishable by fines or prison. The reason spraying diesel outdoors is illegal is that diesel is extremely toxic to the environment. It will kill plants, but it will also kill insects, soil microbes, and worms that are not harmed by Roundup and other herbicides.

In addition to killing wildlife, spraying diesel outdoors also contaminates the water supply. Glyphosate—the active ingredient in Roundup—bonds to soil particles, which makes it unlikely to be carried into water supplies. Diesel does not bond to soil. It will be carried into your local water supply, where it is not removed during water treatment processes. Water contaminated with diesel can cause damage to the liver, kidneys, and nervous system of humans. For the health and safety of everyone in your area, never spray diesel as a weed killer.

Is Roundup Safer than Diesel?

Roundup is far safer than diesel. First, Roundup does not harm soil organisms, unlike diesel. Second, Roundup is far less likely to leach into water supplies and contaminate them. This is because the glyphosate in Roundup bonds with soil particles and breaks down in 1–2 weeks. This makes Roundup less risky to humans and the environment than diesel.

Roundup has been involved in controversy over claims that the glyphosate in Roundup can increase the risk of non-Hodgkin’s lymphoma in humans. In fact, the WHO has claimed that glyphosate causes cancer. However, the EPA states that glyphosate is unlikely to be a human carcinogen. Diesel is proven to cause extreme damage when it is used outdoors. Glyphosate has yet to be proven to be as dangerous to humans as diesel.

Roundup kills weeds in 1–2 weeks, which is the same amount of time it takes for diesel to kill plants. Since both Roundup and diesel attack all types of plants and grasses, they have the same effect as weed killers. Since Roundup is legal to use outdoors—unlike diesel—it is the clear winner between the two.

Almost all systemic herbicides require at least 1 week to kill weeds. This is due to the fact that herbicides must enter the plants through the leaves, then spread to the roots to fully kill the plant. So, any effective weed killer will take a bit of patience. However, uprooting weeds manually kills them entirely in seconds, so that is the fastest option.

Can You Mix Roundup with Diesel Fuel?

Never mix Roundup with diesel fuel to make a DIY weed killer. Not only is this illegal and environmentally harmful, but it also won’t significantly boost the effectiveness of your Roundup. Both diesel and Roundup kill the same spectrum of woody and grassy weeds on the same timeline, so you won’t get better results by combining the two.

If Roundup doesn’t work to kill the plant you’re trying to get rid of, consider using a brush or ivy killer. These products are safer than diesel and much stronger than Roundup. Check out our comparison of Roundup and Crossbow Brush Killer to see why you should consider using a stronger herbicide.

Tough Brush and Weed Killer
Southern Ag | Crossbow Weed & Brush Killer | 2,4-D and Triclopyr
Buy Now
Check Home Depot
We earn a commission if you click this link and make a purchase at no additional cost to you.

Does Diesel Work Better than Roundup?

Before using diesel fuel as an alternative to Roundup, review these key facts:

Diesel fuel should be used to power diesel engines, not as a weed killer. For the safety of yourself, your family, and the environment, never substitute diesel for weed killer. 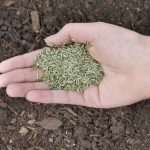