How Many Hours of Sun Does Wisteria Need?

Wisteria needs 6 hours of full sun each day, but up to 8 hours is not too much in most cases. If the afternoon sun is particularly harsh, or you are experiencing a heat wave, wisteria needs some protection from the sun.

Usually, a full day of sun is not harmful to your wisteria vines. In fact, the combination of warmth and sun is the key to terrific blooms.

Can Wisteria Grow in Indirect Sunlight?

Can Wisteria Grow in Shade?

Wisteria does not grow well in shade. In most cases, flowers will fail to bloom if no direct sun, or not enough direct sun, is provided. In deep shade, you should not expect any flowering at all. For this reason, it is always best to plant wisteria in full sun to ensure that your hard work is not in vain.

Wisteria also has a tendency to grow wild when left in shade and will climb up virtually any surface in an attempt to find sun. Additionally, wisteria is not partial to the cold, so if it is planted in shade, it may begin to fail at the end of the season when temperatures begin to drop.

What Happens if Wisteria Doesn’t Get Enough Sun?

Wisteria that doesn’t get enough sun will not always die. In fact, you may find yourself with an abundance of leaves, but not very many flowers. An overgrowth of foliage with a lack of flowers is a sign that your wisteria isn’t receiving enough sunlight.

When it isn’t receiving enough light, your wisteria may weaken because the vine needs exposure to direct sun. This unhealthy state makes your wisteria more vulnerable to plant diseases, fungal infections, and pest insects. So, providing full sun is key to a healthy, low-maintenance wisteria.

Can Wisteria Get Too Much Sun?

It’s possible for wisteria to get too much sun. Even though cold and shade are far more harmful to wisteria than harsh sunlight, it is still possible for it to develop sun scorch or leaf scorch. If this happens, it typically occurs in late summer, when temperatures are hot and droughts may occur.

Leaf scorch is the first sign that your wisteria has gotten too much heat and sun. If the leaves of your wisteria have dark brown spots, the plant likely has sun scorch. The flowers may also turn brown, and blooms may fall off prematurely. These negative effects happen quickly during extremely hot temperatures that are accompanied by a drought. Fortunately, wisteria can revive itself quickly from sun scorch if it is given a bit of shade and a little extra water.

How Much Sun Does Wisteria Require?

Wisteria requires full sun. However, some shade is good during the hottest part of the day. In most cases, though, wisteria can be given day-long direct light with no problems.

You will grow healthy wisteria by following the rules above. However, some varieties of wisteria are slightly unique. Japanese wisteria should not be given shade unless it becomes sun-scorched. Chinese and American wisteria handle shade as long as they have at least 6 hours of full sun on a daily basis. Choose your planting location based on the wisteria variety you wish to grow. 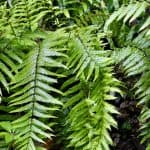