Weeds can be removed from between the pavers of an interlocking brick patio, walkway, or driveway with a number of methods. The most effective ways are:

Once you kill the weeds growing between your interlocking brick patio or driveway, it’s essential to prevent their return. This is best accomplished by filling cracks between the bricks with polymeric sand and/or sealing your bricks. 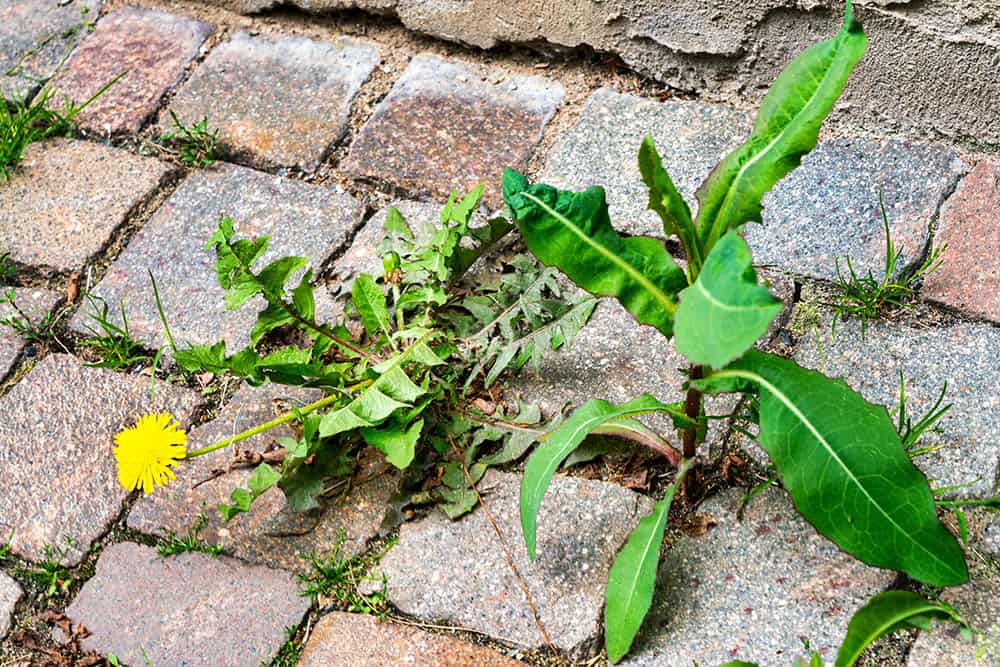 Best Methods to Get Rid of Weeds Between Interlocking Bricks

Weeds and grass growing between interlocking bricks can be very difficult to remove. The narrow cracks between the bricks make it difficult to pull up weeds, so it’s easy for them to return over and over. There are effective methods that will kill weeds in interlocking brick patios and driveways, however. Here are the best ways to get the job done right:

Use a Pressure Washer

Pressure washing your interlocking brick patio or driveway is a great way to accomplish two important steps at once:

Simply pressure wash the cracks between interlocking bricks to blast away weeds, dirt, and any old joint filler. It’s an organic solution for weed control that leads right into taking preventative steps needed to keep weeds out of your brick pavers permanently.

An effective, organic way to kill weeds and grasses in an interlocking brick driveway or patio is to destroy them by using a flame weeder. Flame weeders (or torch weeders) are wandlike devices fueled by propane. By superheating the air above a weed, they can destroy plant tissue in one-tenth of a second, killing the weed.

You can wipe out all the weeds on a larger brick paver patio or driveway in mere minutes with a flame weeder. Within two hours, the weeds will show the effects of flame weeding, and within a couple of days they will have browned and shriveled, making for easy removal.

Hand weeding is one of the best ways to kill weeds in brick pavers. For optimal results, either water your brick-paved area for 30 minutes before weeding or weed the day after a rain. With the right tool to remove weeds from interlocking bricks, you will be able to quickly and easily uproot weeds.

Unlike other organic weed removal methods, such as vinegar and baking soda, hand weeding (and the other methods on this list) remove weeds down to the root, so they won’t return soon.

Commercial weed killers will kill weeds growing through interlocking bricks quickly and completely. Roundup Extended Control is a great weed spray for use in interlocking brick driveways and patios because it kills existing weeds and prevents new weeds for up to 4 months.

A long-term herbicide is a great choice in brick-paved areas. You generally don’t want to grow anything between your interlocking bricks, so you can use stronger solutions that stop plant growth completely. You wouldn’t want to use these weed sprays in your lawn and garden, but they will kill weeds growing between bricks and prevent them from returning.

Avoid These Methods For Killing Weeds Between Interlocking Brick Pavers 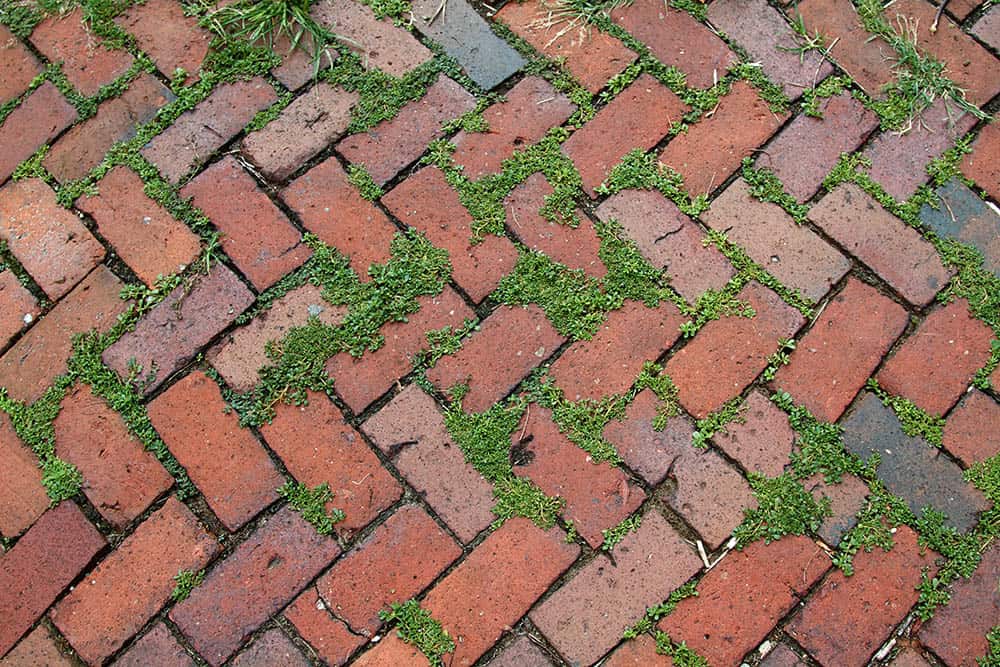 Some people tout “organic” methods for weed control within interlocking brick pavers, but are these organic weed killers really effective? The truth is, many only appear to kill weeds for a short while and will allow weeds to return quickly. Avoid the following methods for weed removal—they are typically a waste of time and money.

Vinegar will not fully kill weeds between interlocking brick pavers. It kills visible plant growth but leaves roots unharmed. If you use vinegar, the weeds will soon return.

Similar to vinegar, baking soda will not kill weed and grass roots. You may see new weed leaves sprouting mere days or weeks after application.

Salt (including Epsom salt) is a dangerous weed killer. Salt is easily carried away by water runoff, where it will migrate from pavers to other parts of your lawn and garden. Salt-poisoned soil will kill any plants or grasses present there and can remain in the soil for several years.

How to Prevent Weeds Growing Between Interlocking Bricks

FIlling brick joints with polymeric sand and sealing pavers is effective at completely preventing weeds from growing between bricks. With these two methods, you can form a barrier to keep your patio, driveway, or walkway weed-free.

Polymeric sand is a compound that acts like a mortar once water has been added. It’s the perfect way to fill the cracks between your bricks and prevent all weeds from growing there. Once polymeric sand has hardened, it forms a cement-like barrier that prevents weeds from taking root or pushing up between bricks.

The best methods for killing weeds growing between interlocking bricks in your patio or driveway are to pressure wash the weeds away, kill them with flame weeding, remove them by hand, or spray them with a long-lasting herbicide. Methods such as vinegar spray, baking soda, and salt are not recommended. Vinegar and baking soda don’t kill weeds to the root and salt may poison the nearby ground, killing grass or garden plants.

Once you have removed the weeds from your interlocking bricks, apply polymeric sand, an outdoor sealant, or both. These measures will keep your brick-paved outdoor spaces free of weeds for years to come.