Because ground ivy has extensive root systems, it is very difficult to remove by hand weeding, flame weeding, or applying weed killers that do not kill the plant down to the root (such as vinegar). To kill ground ivy the natural way, smother the plant with a black plastic tarp. 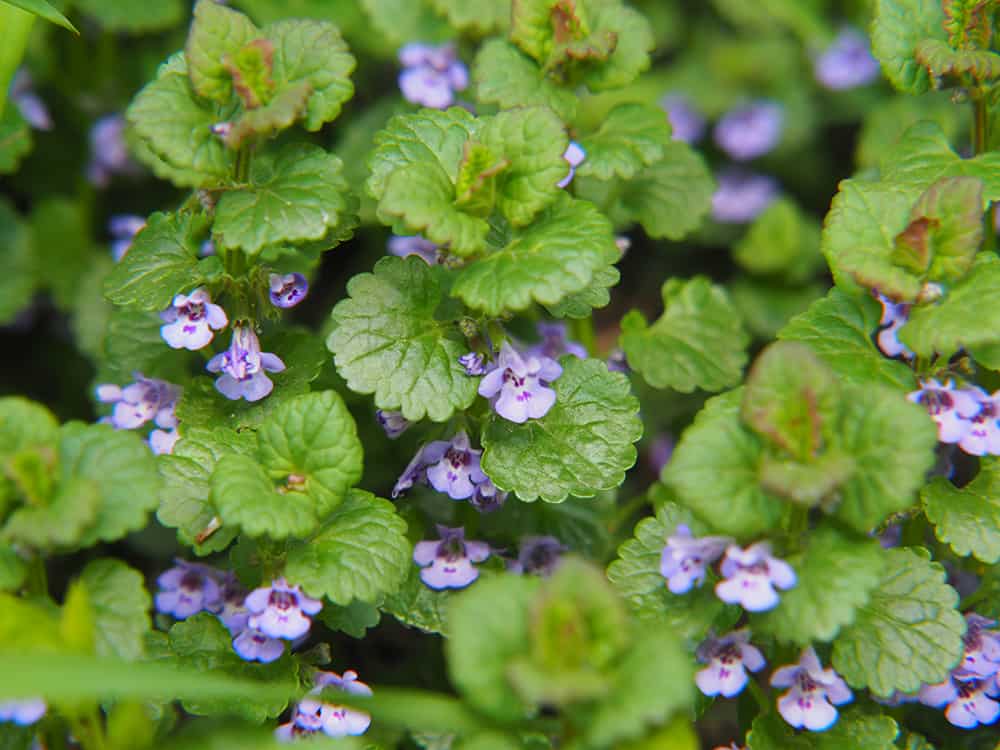 Ground ivy (also known as Creeping Charlie) can be identified by the following features:

Ground ivy often prefers shady areas (such as at the base of trees) but can be found in sunny yards and gardens as well. Once established, it is a very tenacious plant that grows quickly. New leaves are lighter green than mature leaves. 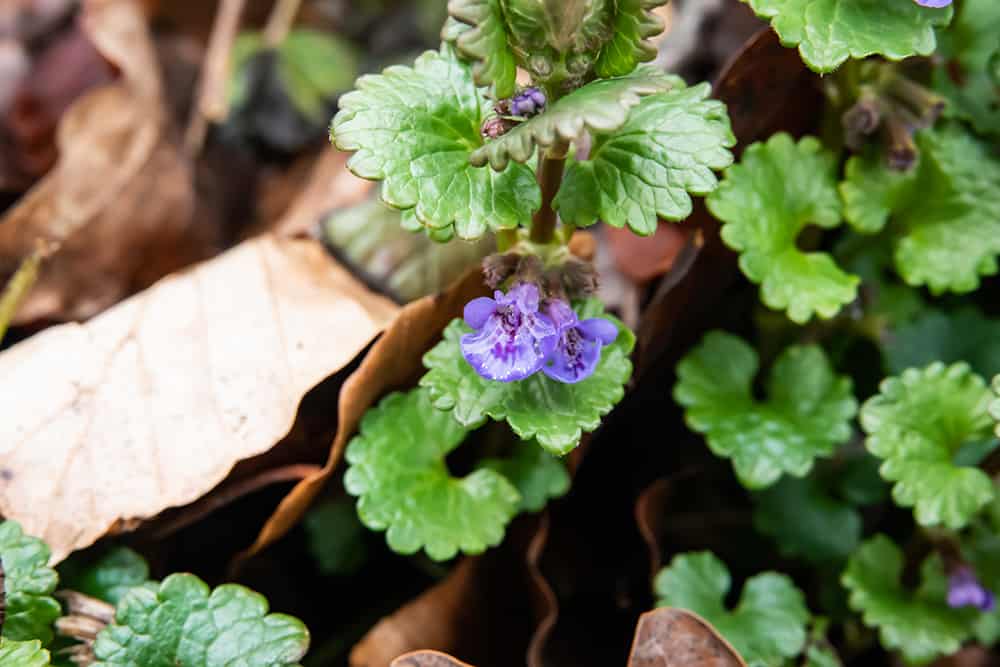 Ground Ivy is a fast-growing plant that is difficult to kill once it takes hold in your yard or garden. It can climb structures, strangle other plants, and even invade grass. The following methods are the best way to kill ground ivy and ensure it does not come back.

The best time to kill ground ivy is in the spring. During this season, ground ivy sends out new runners and leaves, which can be identified by their brighter light green color.

These young leaves and stems allow for weed killers to more easily infiltrate ground ivy plant systems and travel to the root, killing the entire plant. Mature ground ivy leaves are darker green and have a waxy cuticle that resists many weed killers.

Another reason to attack ground ivy early in the year is to prevent the plant from flowering and seeding. In addition to spreading aggressively through roots (rhizomes) and runners (stolons), flowering ground ivy also spreads seeds that lay the groundwork for future ground ivy plants.

Selective weed killers that include dicamba have been shown to be the most effective in killing ground ivy. Choose a broadleaf weed killer that lists dicamba as an ingredient. It may be combined with 2,4-D Amine and/or triclopyr. These other herbicides have some effectiveness against ground ivy, but dicamba is your best bet.

Selective weed killers are safe for use on most grasses. A dicamba-based weed killer is the number one option when ground ivy has invaded your lawn. You can spray the ivy and kill it without harming any surrounding grass. Selective weed killers will kill garden plants, however, so care should be used when spraying in or around gardens.

Ground ivy can be eradicated with a non-selective weed killer, such as Roundup. Glyphosate, the active ingredient in Roundup, will invade the ivy through the leaves and travel to the roots, killing the plant completely within 7–14 days.

Non-selective weed killers, like the name implies, are not picky about what they kill. They will destroy any plant or grass they are applied to. Take precautions during application to make sure no desirable garden plants or turf grasses are exposed to the herbicide.

Ground ivy loves shady regions, often first gaining a foothold in areas of your yard where the grass is thin due to shady conditions. This means you’ll often find ground ivy at the base of trees or on the shady side of your house.

To kill ground ivy in these areas, cover the ivy with a black plastic tarp and weigh down the edges to block all sunlight and water from reaching the plant. This should kill the ground ivy entirely within 4 weeks. In areas with little or no grass, this is an ideal natural strategy for ground ivy eradication.

Ground ivy can be eliminated by adding borax to the soil. Borax contains boron, which is an essential plant nutrient. However, ground ivy is more sensitive to boron overdose than most other plants, meaning it can be killed by raising boron levels in the soil to a point that will harm ground ivy without killing grass or other plants.

To mix and use a boron weed killer, follow these steps:

It’s very important to follow the borax-to-water ratio and area of application guidelines. If you apply too much borax in one area, it can kill garden plants and lawn grasses as well as ground ivy. Also, keep in mind that boron lingers in the soil longer than most weed killers. A single application is usually enough to kill ground ivy and keep it from returning for months, if not years. 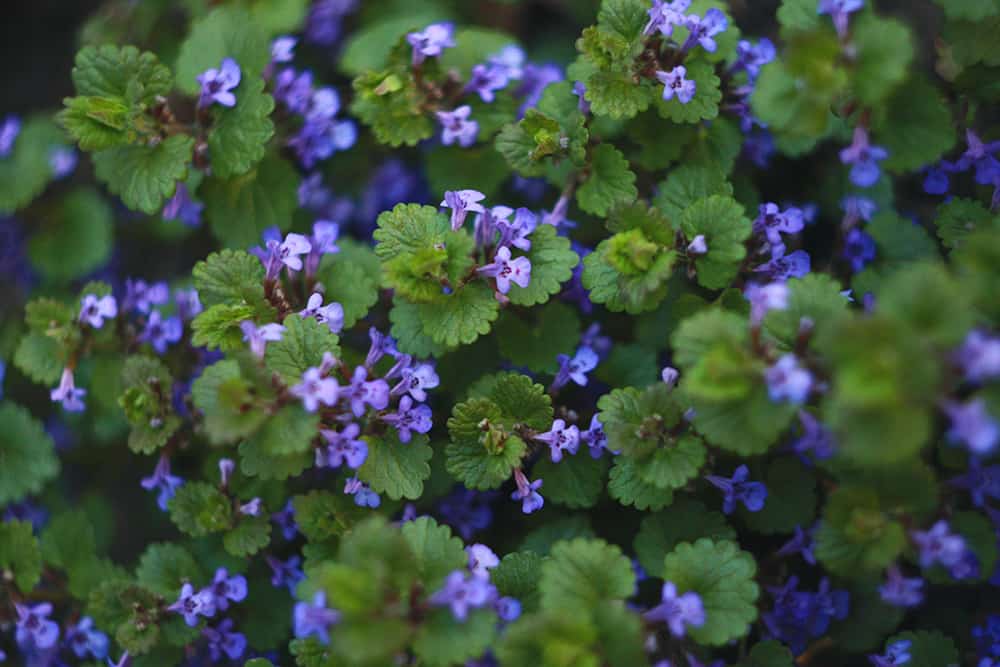 Before using a selective herbicide on your lawn, check product packaging to make sure it is safe to use with your turfgrass.

Roundup is effective against ground ivy. The glyphosate in roundup can kill ivy down to the root. However, ivies and vines are very resilient plants. If standard Roundup isn’t getting the job done, or you see ground ivy returning from the roots, consider using Roundup Poison Ivy Plus Tough Brush Killer to kill it once and for all.

Get Rid of Ground Ivy Naturally

Because ground ivy has very extensive roots and can spring back to life after intense digging and hand pulling, it is one of the most difficult plants to kill by natural means. Flame weeding, boiling water, and homemade weed killers have very low effectiveness against ground ivy.

Vinegar is not a reliable ground ivy killer. Vinegar contains acetic acid, a compound that burns plant leaves on contact but is neutralized by soil, meaning it will not kill plant roots. Ground ivy has very strong, widespread root systems. If even a small portion of ground ivy root is left alive, the plant will resprout.

Using a vinegar spray will only kill the aboveground growth of ground ivy. By the next growing season, the ground ivy will resprout from the roots.

By employing one or more of these methods, you can kill ground ivy permanently, preventing recurring battles with this pest plant. 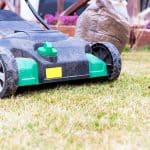 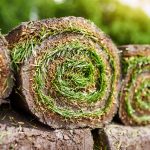