Purslane is a fast-growing and hardy weed with the superpowers of a horror movie murderer—it can seem to come back from the dead to haunt your garden. If you’re currently battling common purslane weeds, you may be at wit’s end, but help is on the way.

To kill purslane in your lawn or garden you will need to first remove the plant by hand pulling, then treat the soil with mulch or other ground covering. To remove purslane growing in your lawn without harming the grass, you can kill it by pulling mature plants, spraying seedlings with 2,4 D herbicide, and then applying pre-emergent herbicide to prevent purslane from returning.

Purslane is an aggressive seeder. If allowed to mature, purslane can cast seeds all over your lawn and garden. Not only that, but purslane seeds can also lie dormant for up to 40 years. If not treated properly, you may be battling purslane for ages. Follow the right steps, and you can nip this problem in the bud. 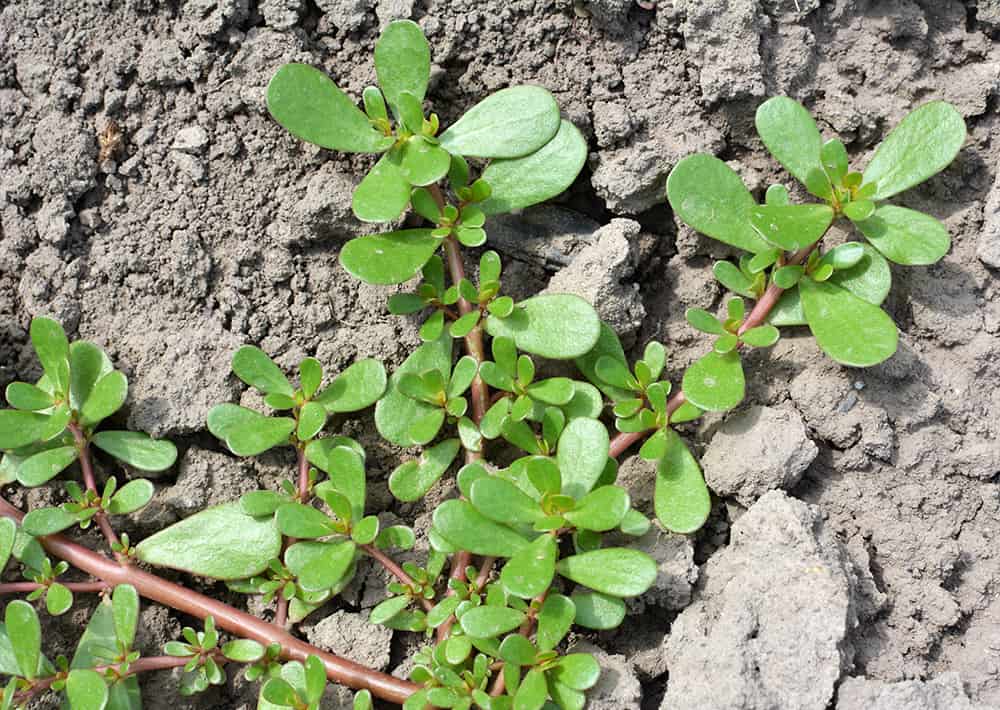 Purslane, or Portulaca oleracea, can be identified by its thick leaves, reddish stems, and yellow flowers. Purslane typically grows low to the ground, in an almost vine-like fashion, and most stems produce both larger and smaller leaves.

Although purslane weed seeds prefer moist soil, mature plants can tolerate dry spells and drought. This is because purslane is a member of the succulent family. Mature purslane plants have the cactus-like ability to store moisture in its fleshy leaves.

Purslane is a common garden invader that tends to take root in unmulched spaces between plants. However, it is not uncommon to find purslane invading thin or bald patches of your lawn, as well as sprouting through pebbles or cracks in the pavement.

Some people mistake purslane for spotted spurge and vice versa, but there are a few differences between these two plants. While spotted spurge can grow low to the ground like purslane, it has thinner leaves, which grow in pairs along the stem, unlike the four leaves you normally see on common purslane. The stem of spotted spurge is also usually hairy, where the stem of purslane is smooth and hairless.

Is There Another Name for Purslane?

Portulaca oleracea is the scientific name for purslane, but it is also commonly called:

How to Kill Purslane Weeds in Your Garden 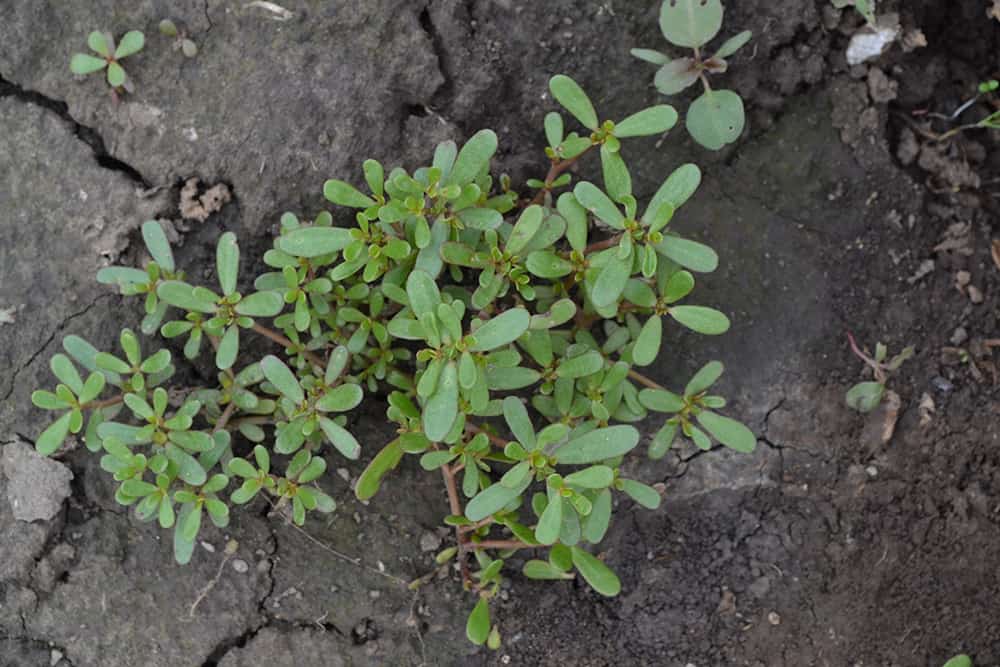 If you’ve got purslane weeds in your garden, then you have a growing problem on your hands, quite literally. While purslane is edible and often a desired ingredient in salads, a vigorous purslane infestation can choke out your existing garden plants.

Here’s how to get rid of purslane in your garden:

Purslane, even in a mature form, has relatively shallow roots. Although purslane is very resilient and can resprout if a portion of the rootstock is left in the soil, it can often be effectively removed by using a hand trowel or other digging tool.

This is where the real horror of purslane control comes into play. It’s such a resilient plant that it can resprout if a single piece of root, stem, or leaf is left in the soil. Not only that, if the plant is left in the open after it has been pulled up, it has enough stored energy that it can complete its growth cycle and release mature seeds.

After removing purslane, bag all plant remains and seal them in a closed bag or lidded trash can. DO NOT add purslane to your compost, as this will reintroduce the plant to the soil. If you do this, the next time you spread compost in your lawn or garden, you’ll see new purslane sprouting up everywhere.

Cover areas of your garden where you have recently removed purslane with a black plastic gardening tarp or heavy-duty trash bags. Weigh these down and leave them for 4–6 weeks.

The sunlight on the black plastic should bring topsoil temperatures up to 150° Fahrenheit, which will kill any purslane seeds present. It will also prevent sunlight from reaching any remaining purslane plants that attempt to resprout. This will prevent a resurgence and help with purslane control in that area.

Apply Mulch or Other Ground Covering

Because purslane is a low-growing plant, having a 3-inch barrier of mulch will help prevent it from growing in your garden. Whether you use bark mulch, ornamental rocks, or another ground covering, a good ground covering will go a long way to stop purslane weed growth.

A great addition to any mulching effort is landscape fabric. Lay down landscape fabric before applying any mulch or ground covering you choose. This semi-porous layer allows water and nutrients to reach the soil and feed your garden plants, unlike plastic coverings. Landscape fabric is also an effective barrier that prevents purslane from sprouting.

Tips for Killing Purslane Weeds in Your Lawn

If you’ve got purslane growing among the grass in your lawn, then tactics such as tarping large areas or applying mulch aren’t an option. If you want to kill purslane on your lawn, you’ll have to use some different methods.

Mature purslane plants are not only drought resistant, but they’re also remarkably hard to kill with weed killer sprays. So, the first step for removing purslane from your yard is to kill these mature plants.

We recommend hand-pulling and digging because tilling chops up purslane. As we covered above, purslane can sprout from even a tiny piece of leaf left behind. Also, tilling may bring additional purslane seeds to the surface, resulting in even more purslane in your yard.

Just as within gardens, pieces of purslane root, leaf, or stem can take root in your yard and grow into new plants. Also, mature plants left in the open after being uprooted can still release seeds.

Bag purslane plants and dispose of them. If added to compost, purslane will resprout.

Purslane can’t compete with a healthy, full yard and won’t take root in grassy areas. After removing purslane plants, spread grass seed on those areas. We recommend a grass seed mix that includes fast-growing grass, such as ryegrass, which will sprout quickly and prevent purslane takeover.

Even after reseeding with grass, you may see purslane seedlings coming up along with your new grass. You might think you’re in for the same battle all over again, but you’re not. Purslane seedlings are much less hardy than mature plants.

Purslane seedlings can be killed with an emergent weed killer. Look for one including dicamba, 2,4 D, or both types of herbicide. These are selective weed-killing compounds that will kill purslane without killing grass.

If you want to go the natural route, use a vinegar-based plant-killing solution on purslane seedlings (be careful, this will also harm any grass it touches) or hand-pull these seedlings.

If you’ve followed steps 1–4, you’ve eliminated purslane from your yard. Now, you might be wondering how to stop it from returning. The answer is to apply a pre-emergent weed killer.

If you wish to use a natural pre-emergent weed killer, apply corn gluten meal to your yard instead of a chemical solution. Corn gluten meal dries up germinating seeds, preventing them from sprouting.

Keep in mind, both natural and chemical pre-emergent weed killers will prevent all types of seeds from sprouting, so don’t use them if you have recently seeded your lawn or plan to do so within the next 6 weeks.

Purslane is Toxic to Dogs

Another reason you’ll want to get rid of purslane from your lawn is that it contains soluble calcium oxalates, which is toxic if consumed by dogs. Disposing of the lawn weed will ensure all pets stay safe when in the yard.

When you see a weed, you want to kill it instantly, so your impulse may be to reach for Roundup or a similar weed killer spray for purslane. However, purslane is a very hardy plant. Mature purslane is often resistant to weed killers, including Roundup. Pulling mature plants and killing purslane seedlings with Roundup is a much more effective option.

Does Purslane Die in Winter?

Common purslane is not a winter weed you will have to deal with as it prefers warmer temperatures and moist soil conditions. Most purslane will die in winter.

Getting Rid of Purslane Weeds

Mature purslane plants are very hard to kill. Whether you’re attacking purslane in your lawn or garden, it all starts with pulling the mature plant and disposing of it. Then, you can more easily control any purslane seedlings with weed killers or by covering them with plastic. Finally, to keep purslane from returning, apply mulch in your garden and use pre-emergent weed control in your yard. 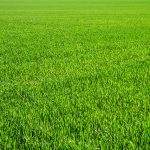 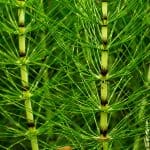