There are several methods to kill moss growing on concrete driveways, sidewalks, paths, bricks, and pavers. The best methods are:

Each of these methods will kill moss quickly on concrete pavers, driveways, and other surfaces. Additionally, some will prevent moss from returning. Best of all, each solution is cheap, easy, and can be performed quickly.

7 Methods for Killing Moss on Concrete

When treating moss in paved areas, it’s important to ask yourself these questions before choosing a method:

Below, we’ll walk through all the best methods for killing moss, highlighting their pros and cons. Then, you’ll be able to choose the solution that’s right for you.

Commercial moss killers, like BioAdvanced Moss & Algae Killer, can be used to kill moss on concrete, bricks, and pavers. It’s hassle-free because it requires no mixing, and it kills moss without staining concrete, harming nearby plants, or discoloring wood or paint it comes in contact with.

To use, simply attach the bottle to the end of a garden hose and spray the moss. Typically, the moss will turn brown and die within 3–5 hours. From there, dead moss removal should be easy with some water and a broom or stiff brush. Do not use weed killers like Roundup to try and remove moss from concrete or bricks.

Combine 0.5 cups (125 ml) of household bleach with 1 gallon of warm water to create a mixture that will kill moss. At this rate, the bleach solution is diluted enough that it is relatively safe for use around plants and paved surfaces, but it’s still best to be careful. Pour or spray the bleach solution on the moss to kill it within a few hours.

At this dilution rate, there is a low chance of the bleach mixture harming your grass, but it is still possible. If you are worried about runoff damaging your yard, don’t use this option.

Mix 1 part white vinegar with 2 parts water in a spray bottle. Spray moss with the vinegar mixture and let sit for 4–6 hours. The moss will die over the course of 24 hours. Within a day or two, you’ll notice the once green moss is now brown. It should now also be easy to remove.

This vinegar mixture is relatively harmless and, if you can target the moss without impacting other plants, is a quick solution made from household items.

Detergent and Scrub or Power Washing

You can remove moss by hand by applying dish soap and water to moss and scrubbing. Live moss can be stubborn, so this is more difficult than removing dead moss. However, it’s totally chemical-free. If you don’t want to scrub by hand, a power washer can blast the moss off concrete or brick easily.

In addition to solving your moss problems, pressure washing your concrete can bring it back to a like-new appearance. This affordable power sprayer will kill unsightly, slippery moss on your concrete patio or driveway, and restore the look of your outdoor space.

Economical Pressure Washer
Sun Joe Electric High Pressure Washer | SPX3000 2030
Buy Now
Check Home Depot
We earn a commission if you click this link and make a purchase at no additional cost to you.

You can kill moss with plain boiling water. All you have to do is bring the water to a boil in a regular tea kettle and pour it onto the moss growing on your concrete. It will kill moss within hours. Even better, as long as the boiling water isn’t poured on any other plants, the runoff will cause no harm.

This is probably the cheapest and quickest homemade moss killer. Plus, there are no chemicals or mixing formulas involved. The only downside is it can be incredibly dangerous to transport boiling water from inside to the moss issue outside. Use extreme caution with this method.

Moss loves shade. It simply won’t grow in sunny areas. Although it isn’t always possible to eliminate shade on your concrete or patio areas, if you can, it will work wonders. Trim back any plants that shade your concrete to provide ample sunlight. Also, move outdoor furniture or other fixtures that cast shade, as they can encourage moss growth. After a few days of direct sunlight exposure, the moss will die.

If you’re able to increase the amount of sunlight that reaches concrete areas overgrown with moss, not only will the moss die, it also won’t grow back. This is not only a moss-killer, but a moss-preventer as well.

In addition to shade, moss thrives in moist areas. If you can reduce the moisture that collects on your concrete, brick, or pavers, you will kill existing moss and keep it from growing back.

In humid regions, it may not be possible to eliminate the moisture that causes moss to grow on your concrete, but in many cases fixing issues with standing water or drying up your yard can go a long way to combat the growth of moss.

How to Get Rid of Moss from Concrete

Moss thrives in shady, moist areas. If you can increase sunlight on your concrete surfaces and reduce the amount of water that is trapped there, you can naturally kill moss and prevent its return. If this isn’t possible, spray the moss with a lawn-safe moss killer, or use boiling water, bleach, vinegar, or a pressure washer to kill and remove moss from concrete.

Moss treated with a spray will brown and die, but won’t disappear. Dead moss is a lot easier to remove than living moss, however. Once the moss has died, use water and a broom to clean your concrete and remove all traces of moss. 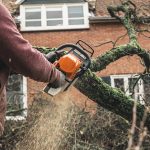 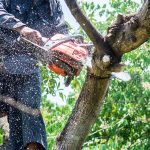