To remove rusted toilet tank bolts, first turn off the water supply that feeds water to the toilet tank. Then, flush the toilet tank to empty it. This will stop water from spilling out of the tank during bolt removal. Once the tank is drained, spray the bolts with penetrating oil and attempt to loosen them with a wrench. If this doesn’t work, use a hacksaw, oscillating tool, or reciprocating saw to cut the rusted bolts at the gap between the toilet tank and the bowl.

Why Do Toilet Tank Bolts Rust?

Toilet tank bolts are exposed to a lot of moisture. The bolt heads are constantly submerged in water at the bottom of the toilet tank. Steel bolts exposed to this constant water will eventually begin to rust. Not only that, but leaking water, moisture in your bathroom from a nearby shower, and other factors contribute to rusted toilet tank bolts. Rust can form on the bolt heads, or on the nut and threaded portion that extends outside the toilet tank.

How Do You Stop Your Toilet Tank Bolts From Rusting?

The best way to stop toilet tank bolts from rusting is by using all-brass bolts and nuts to secure the tank to the toilet bowl. Unlike steel, brass won’t rust. If you are replacing rusted toilet tank bolts, make sure to use a set of brass bolts. That way, you don’t have to remove any rusty bolts in the future. 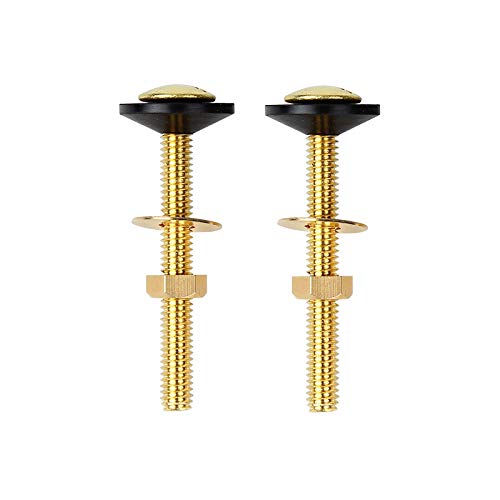 Removing rusted toilet tank bolts is simple and can be accomplished in a few ways. The following method is the best way to remove even the most stubborn bolts without cracking or damaging your toilet. Your toilet tank will be free in just a few minutes with this process.

Shut Off the Water Supply

Before attempting to remove the toilet tank bolts, first close off the water supply that feeds the toilet tank. To do this, search for a pipe that feeds a line running to the underside of the toilet. There should be a handle on this pipe. Turn the handle clockwise to close it. This will prevent water from refilling the tank after flushing.

It helps to remove the lid of the toilet tank during this step, so you can observe the water level in the tank. Then, flush the toilet to drain the water from the tank. It may require multiple flushes to clear the tank. With the tank cleared of water, you will be able to easily access the bolts and remove them without water leaking out of the tank through the bolt holes. At this point, it’s a good idea to locate all the tank bolts. Some toilets have two tank bolts while others have three.

Spray the Bolts with Penetrating Oil

Attempt to Loosen the Nuts

Once the penetrating oil has soaked for at least 15 minutes, use an adjustable wrench or socket wrench to attempt to loosen the nut from the bolt. If the bolt is very rusted, the nut may still resist loosening. Alternatively, the entire bolt and nut assembly may rotate without loosening the nut. Don’t worry, there’s a way to tackle both these situations.

In many cases, a second set of hands and a little penetrating oil can loosen stubborn rusted bolts. However, there are times where even this won’t work. In these cases, move on to Step 5.

To make the cut, work carefully and slowly, making sure you are not scraping the toilet itself. It is a good idea to duct tape a layer of cardboard to the toilet at any point where the blade may come in contact with the porcelain, to prevent scratching the toilet. Once all the bolts are cut, detach the water supply line from the tank and lift the tank off. You can now easily remove the cut bolts.

How Do You Remove Rusted Toilet Tank Bolts?

In order to remove a set of rusted toilet tank bolts, you should:

This series of steps will prevent water leaks or a cracked toilet. It will also save you a lot of trouble because it is the easiest way to get the job done. Just make sure to replace the rusted bolts with brass bolts and nuts, since those won’t rust. This will prevent you from dealing with any stubborn toilet bolts in the future.