How Do You Put a Towel on a Windshield to Prevent Ice?

When choosing a towel to put on your windshield to prevent ice formation, choose a clean, dry towel that is not extremely fuzzy. Lift your windshield wipers, spread the towel out over the windshield, and then fold the wipers back down to hold the towel in place.

If you need to protect your car from snow without a garage, using a towel to cover your windshield is one of the best methods for reducing the time you spend scraping ice. Ice and snow will collect on the towel, but the towel provides a barrier that keeps the windshield clear. Simply lift the towel off your windshield to reveal the pristine glass beneath.

What Can You Put On Your Windshield to Prevent Frost?

There are several tricks for keeping your windshield ice-free in winter. Due to extreme winter weather patterns, it’s essential to weigh your options so you can best prevent your windshield from icing up. Using these tactics will eliminate the need for excessive scraping during the winter months.

A towel is a great option for keeping your windshield clear of ice because it is cheap, common, and reusable. If you have an old beach towel lying around, it’s a good candidate for a windshield cover. Once you’re done using it, you can simply dry the towel, and it’s ready to be used again.

Despite their ease of use, towels aren’t always the best choice for preventing a frozen windshield. Towels effectively keep frost and ice off your windshield at temperatures down to 15℉ (-10℃). Below this temperature, the towel is likely to freeze to the windshield. Also, weather patterns that contain rain/snow mix, hail, or freezing rain can freeze your towel to the windshield. There are better choices for these conditions.

In freezing temperatures, a sheet of cardboard is a more effective windshield covering than a towel. It will form a frost- and snow-proof barrier in temperatures below 15℉ (-10℃). Simply place the piece of cardboard over your windshield and hold it in place with the wipers.

The drawback of cardboard is that, like a towel, freezing rain may soak the cardboard and freeze it to your windshield. This makes cardboard a good option when protecting your windshield from frost and snow in subzero temperatures. However, it’s not a perfect fit for wet winter conditions.

Although a tarp or windshield cover may be more expensive than an old towel, the investment is well worth it if you battle extreme weather conditions. If the towel method fails, it’s time to step up to a stronger product for preventing ice on your windshield. 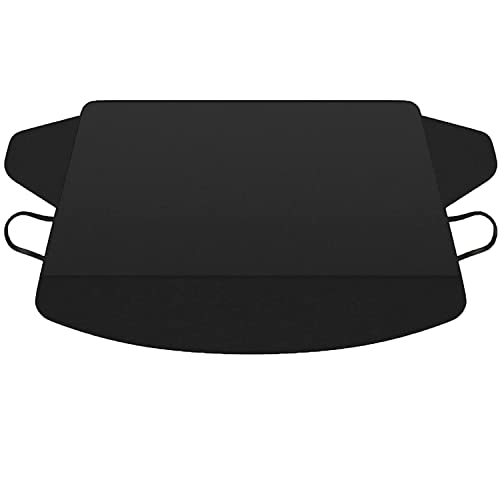 What Methods Won’t Prevent Frost From Forming on Your Windshield?

When preparing your windshield for a cold night, some methods won’t get the job done. Avoid these mistakes so that you don’t find yourself scraping an icy windshield for ages before you can drive your car.

Vinegar is not an adequate de-icer or ice-preventer. White vinegar freezes at 28℉ (-2℃), only a few degrees below the freezing point of water. Not only will a vinegar solution poured on your windshield mostly just run off, but the acetic acid in the vinegar will destroy windshield wipers and rubber seals around doors and windows.

Isopropyl alcohol is another poor option for preventing ice formation on your car. Alcohol evaporates quickly, meaning an alcohol solution applied to your windshield will turn to vapor in a short time. Then, ice will begin to form.

Instead of an alcohol solution, use a de-icer that is made for use on cars. Commercial de-icers are formulated to be safe on rubber, so you can use them to de-ice windows without ruining your rubber door seals. A good de-icer is also essential for getting snow off your car tires.

Can You Put a Towel on Your Windshield to Stop Ice From Forming?

A dry towel placed on top of your windshield will keep ice and frost from forming on your windshield. This tactic works at temperatures down to 15℉ (-10℃). At lower temperatures, a sheet of cardboard or a tarp provides more effective ice prevention. If you are expecting freezing rain or sleet, make sure to use a waterproof windshield cover, such as a tarp. By applying the right tactic in the right conditions, you can leave your ice scraper in the trunk and drastically reduce the time you spend scraping ice in the winter.