Pine trees typically shed one-third of their needles beginning in late summer (September). This annual “needle drop” continues until late fall or early winter (November/December). This fall shedding of needles is a natural occurrence and will stop as soon as winter approaches.

Other “evergreen” trees lose needles in different patterns. Spruces and firs gradually lose and replaced their needles year-round. Yew trees shed needles in spring. Larch trees, also known as Tamaracks, lose all their needles in fall and regrow them in spring.

What Time of Year Do Pine Trees Drop Their Needles?

Pine trees drop their needles from late summer through fall. Needles typically begin falling in noticeable amounts in September, slowing to a halt in November or December.

Although they are considered “evergreen” trees, pines do lose a significant amount of needles each fall. These are typically the older, duller needles toward the base of the branch. A healthy tree will retain the vibrant, new needles at the branch tips.

Do Pine Needles Fall All Year Round?

Most pines drop a percentage of their needles in the fall. You may see some very light needle fall in spring or summer, but this is usually caused by a dead branch. If your pine tree is dropping large quantities of needles in spring, summer, or winter, it may be sick.

How Do You Stop Pine Needles From Dropping?

A fall needle drop is part of the normal life cycle for pine trees. There’s nothing you can do to prevent your white pine from losing one-third of its needles each fall.

Needle loss at unexpected times can be caused by pine root damage, insects, drought, or a fungal disease. If your tree is losing more than half its needles, or is losing needles outside of the fall season, contact a tree specialist to diagnose the problem.

Should Pine Needles Be Raked Up?

Evergreen needles, like leaves, can be used as a helpful mulch or fertilizer. However, they should be used with care. Pine needles are somewhat acidic and an overload in one area can raise soil acidity, causing grass and other plants to struggle.

If you would like pine needles to be gone quickly instead of piling up in drifts, it’s a good idea to pile them up and pass over them several times with a mower. These smaller pieces of pine needles will decompose much more quickly. Spread them evenly in your lawn and garden in fall and they’ll be decomposed by spring.

How Can You Tell if a Pine Tree is Dying?

If a pine tree is losing needles at any time of year other than late summer/early fall, then it may be dying. Similarly, if entire portions, or an entire side, of the pine tree is turning brown and losing needles, that is a sign of disease.

A pine tree should naturally lose needles in an even distribution throughout the tree. Localized browning and needle loss in conifers are a cause for concern and the sign of a dying tree.

What Time of Year Do Evergreens Stop Dropping Needles?

Annual pine tree needle drop begins in September and ends in December. Once winter sets in, the pesky needles clogging your gutters and piling up on your garden plants will stop falling. However, this fall needle loss is natural and unavoidable with pines. Unless your tree is dying, it will only lose 1/3–1/2 of its needles in fall, then remain green throughout the rest of the year. 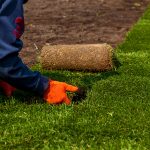 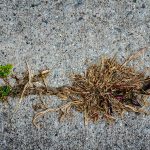