Primer should be mixed before painting. If you do not stir your primer then you will not get even coverage on your walls. This leads to a poor-looking finished product when you follow up with colored paint. The best way to mix your primer is to set the can of primer on a dropcloth. Then, use an electric drill equipped with a specialized paint-mixing bit. Start at the bottom center of the can and mix in circles while the drill is spinning the mixer bit. After 1–2 minutes of mixing, your primer is ready for use.

What Happens if You Don’t Mix Your Primer?

Primer that is not mixed prior to painting will lead to an uneven, streaky appearance. Not only is streaky primer a problem, but using unstirred primer can cause the paint to dry incorrectly. This results in chalky portions of paint that flake off the wall almost immediately after drying. This causes flaky and peeling paint when you add your color coats.

Mixing your primer thoroughly before painting is key to creating a streak-free, even finished product. Just remember that mixing your primer prior to painting simply means stirring up the primer so all the ingredients are properly combined. There are several shocking reasons you should never mix primer with paint.

6 Steps to Mix Primer for an Incredible Base Coat

In order to get the best paint job, it’s essential to get your primer just right. After all, primer is the foundation for everything that comes after. To get your primer mixed properly, follow these quick and easy steps.

Before you begin mixing, lay a large drop cloth on the floor. Then, set your primer can in the middle of this cloth and remove the lid. Set the lid aside somewhere that it won’t be stepped on. Mixing and preparing paint shouldn’t get too messy, but it pays to be careful. Alternatively, you can mix your primer outside, if the weather allows. This way, you don’t have to worry about where the paint splatters land.

Use an Electric Drill and Mixing Bit

One of the most essential tools for painting is an electric drill. Why? For mixing of course. Equip a drill with this paint-mixing attachment. It’s far more effective than those wooden stir sticks the hardware store gives you when you purchase paint. You’ll spend less time mixing with a drill, and you’ll get a far better primer mix. 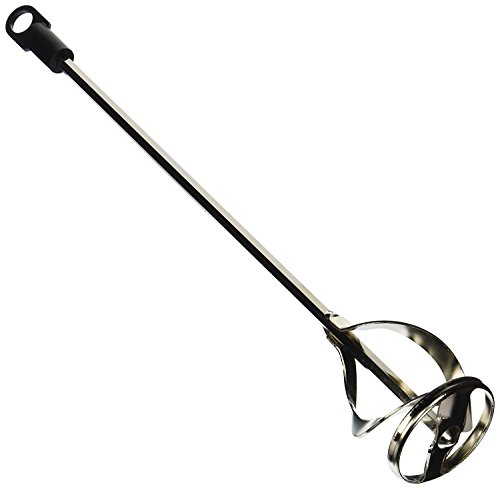 Start at the Center

Slowly plunge the mixer into the center of the paint bucket. If the paint looks like it will overflow, pull the mixer out and pour some of the primer into a smaller container. You can add this later and mix it in. Once your mixer is at the bottom of the bucket, slowly squeeze your drill trigger to begin mixing. Then, ramp up to maximum speed. Move the mixer in small circles for 20–30 seconds.

Work Your Way to the Edge

Slowly lift the mixing attachment from the bottom of the paint can as you continue to stir in slow circles around the outer walls. Do not bring the mixer to the top of the paint, since this can introduce air and cause your paint to form bubbles. Instead, raise the mixer attachment to the halfway point between the bottom of the can and the top of the paint. Continue mixing for another 30 seconds until the primer is smooth, fully mixed, and bubble-free.

Once you’ve completed this 1–2-minute mixing process, your primer is ready for use. So, you can pour some into a roller pan and get to work. Before you do, it’s a good idea to clean off your mixer attachment and drill. If you are using latex primer, wash off the mixer with a hose end sprayer, then allow it to dry. If paint has splattered your drill, wipe it off with a damp cloth. Then, it’s time to prime.

Does Primer Need to be Mixed?

It is important to mix primer before use so that the ingredients in the primer are properly combined. Here’s how to do it:

You’ll get better results from all types of primers by mixing them thoroughly beforehand. In addition, this same mixing process can be used on all types of paint. Thoroughly mixing primer and colored paints results in a smoother painting process and a better-finished product.