If there is deep snow or ice buildup on your wooden deck, the best way to tackle it is by first sweeping or shoveling as much snow off the deck as possible. Then, spread a salt-free deicer that won’t damage your deck. Make sure to avoid using rock salt because this can ruin wood, concrete, and composite decking. Also, do not spread sand or gravel on your wood deck. It may provide traction now, but it can scratch your deck boards as the ice melts.

Common ice melt products that contain sodium chloride will damage and corrode your wood deck. Sodium chloride is found in rock salt, table salt, and water softener tablets. It will damage your wood, causing cracks, splitting, and discoloration. Therefore, these typical deicers should be avoided when you treat your deck and stop ice from forming on your wooden steps.

There are several products that are far better for eating through ice on your deck. Some deicers contain no form of salt at all, making them safe for use on wood decks. Others (such as magnesium chloride and calcium chloride) are far less harmful to wood decks than sodium chloride. We’ll cover our favorite products in the list below.

7 Tips for Melting Snow and Ice on Your Wood Deck

If your deck is under a deep layer of snow, it can seem like a daunting task to reclaim your outdoor space. However, there are several tactics that will melt snow and ice without damaging your deck. Below are the do’s and don’t’s of getting rid of heavy snow and the layer of ice that forms beneath it.

An ice melt product spread on top of deep snow will work slowly. You may even lose faith in your deicer and give up on it. The truth is, deicer struggles when spread on large snowbanks. To make melting snow and ice easier, first, get rid of as much of the loose snow as possible.

We recommend using a push broom to sweep snow off your deck when possible. It takes a lot less work than shoveling and there’s a much lower chance of scratching your wood or composite deck surface. If the snow is so deep you have to shovel it off your deck, use a plastic shovel. Metal shovels can scrape and gouge your deck.

Use a Salt-Free Deicer

To prevent damage to the wood of your deck, search for a gentle, salt-free deicer. These products don’t contain any sodium chloride, so they won’t cause your deck timbers to split. Plus, they’re far more effective than the competition. Our favorite salt-free deicer works at temperatures as low as -2℉ (-19℃). In comparison, rock salt stops melting snow and ice if temperatures get down to 15℉ (-9℃).

Another massive benefit of salt-free deicers is the fact that they’re safe for pets. Traditional salt deicers are harmful to your pet’s paws. If your furry friend walks on a surface treated with rock salt, their paw pads can actually suffer chemical burns. Use a pet-safe, salt-free deicer to keep your loved ones safe. 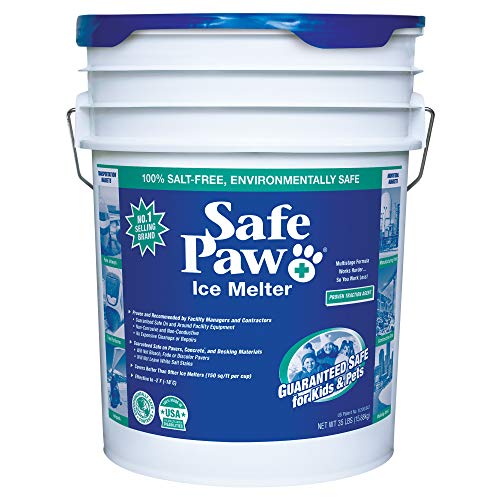 If you live in a region where the winter season brings very low temperatures and heavy snow, opt for a powerful deicer. Our top choice is this Magnesium Chloride deicer because it: 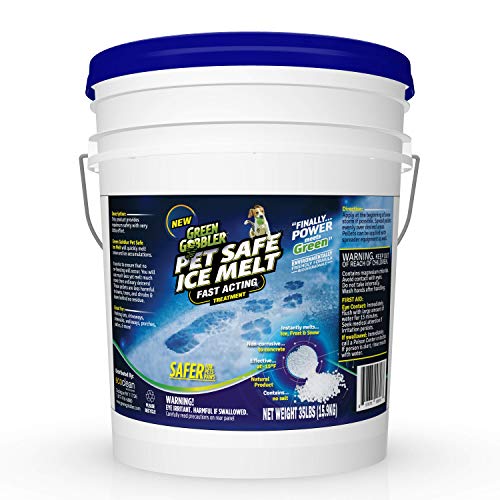 Although spreading ice melters on top of snow and ice works, you’ll get the best results from spreading a layer of deicer before a snowstorm arrives. Then, spread more deicer after the snow has fallen. This will help the deicer eat through the snow and ice, melting it so you don’t have to shovel frozen snow.

A preventative application of deicer on your deck will melt snowflakes as they touch down. This creates a briny layer of snowmelt that, in turn, melts subsequent snowfall. By following this method you can keep your deck clear of snow.

Whatever you do, don’t resort to using a standard salt deicer on your wood deck. Rock salt is a form of sodium chloride (the same substance as table salt). It draws out moisture, which can dry out your deck. This results in board shrinkage, splitting, and cracks, not to mention changes in color.

Avoid similar hacks that include table salt and water softener pellets. They all contain sodium chloride. In fact, sodium chloride even corrodes concrete. So, if you want to keep snow from sticking to your driveway, rock salt isn’t good for this task either.

A common trick for adding traction to an icy deck is to spread sand or gravel. Avoid doing this when possible. Sand and gravel are tough and gritty. Foot traffic on an icy deck with sand can cause the sand to scrape the surface of your deck. This will destroy the finish and leave visible gouges.

In general, we prefer to recommend gentle deicers on wooden decks, since they won’t harm the wood. However, preventing dangerous slips and falls is important during the winter months. If you must add traction to a slippery deck, use kitty litter. A layer of cat litter will help you get a sure footing, but it’s less likely than sand to scratch the wood.

There are a few recipes for homemade deicers online. Some are effective at melting ice, while others are not. However, even the ones that are effective can damage your wooden deck. A mix of vinegar and hot water is not an effective ice melt, but the vinegar can discolor your deck. On the other hand, rubbing alcohol and hot water will melt ice, but the alcohol will also damage any wood it comes in contact with.

Stick with commercial, salt-free deicers for getting rid of snow buildup on your deck. It’s not worthwhile to melt the snow if it will destroy the appearance of your beautiful deck in the process.

How Do You Melt Snow On a Wood Deck?

When snow weather arrives, your deck can quickly be buried. However, you can easily melt snow and ice off your deck by using these tips.

By choosing the right methods and avoiding common pitfalls, your deck will shrug off snowy weather and emerge in spring just as beautiful as it was in fall.