To use starter fluid on a snowblower, it’s important to spray the fluid into the machine’s air intake. Unlike lawn mowers and other tools, snowblowers typically do not have an air filter. In most cases, the air intake is located under a plastic cover near the choke lever. To fully access the carburetor air intake, it’s often necessary to take off the plastic cover. Then, spray the starter fluid into the air intake for 2–3 seconds before attempting to start your machine.

When Should You Use Starter Fluid for a Snowblower?

Starter fluid should not be your first solution when attempting to start a stubborn snowblower. If your unit won’t start, first make sure it is fueled with clean, new gasoline. If gasoline from the previous year is still in the fuel tank, drain it out and refill the snowblower with non-ethanol fuel.

It’s essential that you use starter fluid only on carbureted, gasoline engines only. You will damage a diesel engine by using starter fluid. Starter fluid may work for your snowblower on a cold morning, but don’t use it on a diesel truck or tractor.

Where Do You Spray Starter Fluid On a Snowblower? [6 Steps for Starting Your Snowblower]

Few things are more frustrating than going to start your snowblower on a cold winter morning only to have it sputter and refuse to start. Meanwhile, the snow is piling up outside, especially on the end of the driveway. Even if you’ve used starter fluid on stubborn mowers, using it on a snowblower requires a different process. Here’s how to get a snowblower started with starter fluid:

The cover does not have to be fully removed from the machine. As long as it allows access to the carburetor, the cover is sufficiently removed. Sometimes, a cable or wire killswitch attaches the cover to the blower. This does not need to be removed. Below is a video demonstrating how to remove this cover on a standard snowblower.

With the cover removed, the carburetor and air intake of the snowblower should be visible. Search for a piece of metal with an upward-facing opening. Sometimes, it helps to follow the linkage from the choke lever to the item it moves. Since the choke lever controls a portion of the carburetor, you can be sure tracing the path of the mechanism will lead you to the right place.

In most cases, the carburetor consists of an air intake port on the top side, closest to you. Once you’ve discovered it, you’re ready to move on and get your hard-starting engine going.

It helps to take photographs as you go. Keep your phone handy and photograph the cover before removing it. This makes opening the choke, as well as putting the cover back on, simpler.

The starter fluid you’ve sprayed into the air intake will enter the carburetor, where it will be pulled into the engine when you attempt a start. Unlike fuel, which vaporizes poorly in cold weather, starter fluid is a flammable liquid that vaporizes easily, meaning it will fire up more reliably than fuel. 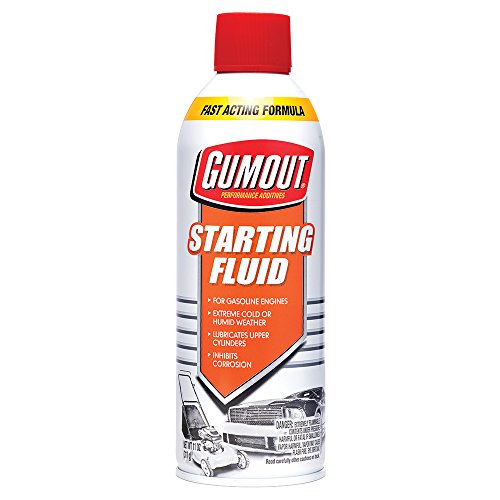 Put the Choke Cover Back Into Place

Reverse the steps you took to remove the choke cover. Secure the cover back to the snowblower. Then, put the choke knob back on the lever if it was removed.

Now, you’re ready to attempt to start your snowblower. If you already primed your snowblower during previous attempts to start it, do not prime the engine again. This can risk flooding the carburetor and making your starter fluid useless. Instead, use the pull start or electric start to fire up your snowblower.

How Do You Use Starting Fluid On a Snowblower?

Because most snowblower models do not have an air filter, using starter fluid on a snowblower is a unique process. To start your snowblower, follow these steps:

In most cases where a blower won’t start because of cold weather, spraying starter fluid into the carb intake will fix the problem. Your snowblower will be humming along in no time, making it easy to clear that new snow off your driveway.