2,4-D is an ingredient in many products designed to destroy poison ivy, but it has limited effect on its own. It performs better when combined with other herbicides.

How to Identify Poison Ivy

Poison ivy is characterized by its three-leaf structure. If you see a low-growing or creeping plant with leaves growing in groups of three, be wary. Poison ivy can appear in a number of different variants. It may have smooth-edged leaves, serrated leaves, or look like oak leaves. If you are unsure whether or not a plant is poison ivy, avoid contact with it.

Poison ivy causes an allergic skin reaction when handled. The effects of poison ivy then manifest into redness, itching, raised bumps, and/or blisters. If you exhibit any of these symptoms after touching a three-leafed plant, it may be poison ivy. If you are experiencing an extreme allergic reaction to poison ivy, including difficulty breathing, contact poison control immediately.

Poison ivy can be killed through a number of different methods. These range from herbicides that can be sprayed in yards to kill poison ivy without killing grass and other plants, to herbicides that kill any plant they are applied to (including poison ivy), to organic lawn cultivation methods.

It is not essential to use a herbicide containing only 2,4-D to get rid of poison ivy, as 2,4-D alone does not efficiently destroy poison ivy plants. Dicamba and Triclopyr-based herbicides perform much better.

Fast Acting Brush and Ivy Killer
Ortho GroundClear | Ivy & Tough Brush Killer
Buy Now
Check Home Depot
We earn a commission if you click this link and make a purchase at no additional cost to you.

These weed sprays may also contain 2,4-D as an additional ingredient but are more effective than using 2,4-D alone. Read the active ingredients carefully when choosing your poison ivy killer.

Tough Brush and Weed Killer
Southern Ag | Crossbow Weed & Brush Killer | 2,4-D and Triclopyr
Buy Now
Check Home Depot
We earn a commission if you click this link and make a purchase at no additional cost to you.

Most non-selective herbicides for poison ivy are Glyphosate-based, like Roundup. One of the best on the market is Roundup Poison Ivy Plus Tough Brush Killer. This effective poison ivy killer is formulated to attack brush and vine-like plants (including poison ivy) that can be a lot more resilient than other weeds.

Always use a proven herbicide treatment for controlling poison ivy vines. Using chemicals like bleach is never a good idea for your battle with poison ivy.

Glyphosate-Based Brush Killer
Roundup | Poison Ivy Plus Tough Brush Killer
Buy Now
Check Home Depot
We earn a commission if you click this link and make a purchase at no additional cost to you.

What is the Best Time to Spray Poison Ivy?

There is a right and a wrong time to provide an herbicide treatment to poison ivy. If you spray at the wrong time, you may not kill the ivy with herbicides. This is a waste of your time and money. In order to wipe out the poison ivy in as few applications as possible, follow this timetable for your herbicide applications:

Never spray poison ivy in fall or winter, when it is not actively growing. Your weed killer application will not be successful. Time your application according to the active ingredients in the herbicide of your choice. You will take better control of poison ivy and see results more quickly.

If you prefer not to use chemical methods to control poison ivy, there are ways to kill invasive plants without using herbicides. If you have poison ivy on your lawn, mowing over it regularly during the growing season will eventually kill it. Also, digging out poison ivy roots, as you would with other weeds, is effective.

Whether poison ivy has been uprooted or is still growing, never burn it. Burning poison ivy releases poisonous smoke. Toxins from the plant can enter your lungs if the smoke is inhaled. This can cause serious lung inflammation and difficulty breathing. Also, never use vinegar to try and kill poison ivy.

Take caution and wear protective clothing when removing poison ivy by hand and disposing of it.

Is 2,4-D Effective Against Poison Ivy?

Dicamba and Triclopyr are more effective at killing poison ivy than 2,4-D, and both are lawn-safe. Search for herbicidal products that contain one or both of these ingredients. 2,4-D does have some success against poison ivy but is more effective when blended with Dicamba and/or Triclopyr. These 3 herbicides are commonly mixed together in commercial weed killer sprays.

Alternatively, if you don’t have to worry about protecting the grass, you can use a glyphosate-based effective poison ivy killer. It is also possible to kill poison ivy organically, through repeat mowing or hand-pulling plants.

If you are spraying your poison ivy with a weed killer, make sure to spray poison ivy only when it is actively growing. This makes spring and summer the best times to attack poison ivy. Avoid spraying during fall or winter, when dormant poison ivy is less likely to be harmed by the weed killer. 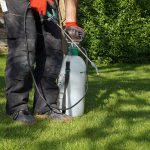