Glyphosate is often the better choice as a non-selective weed killer than Diquat Dibromide. This is because Glyphosate infiltrates plant systems and kills weeds down to the root, while Diquat Dibromide only attacks portions of the plant it is sprayed on. A plant sprayed with Diquat Dibromide may experience leaf and stalk damage, but can resprout from the roots.

Why Glyphosate is the Best Choice

Weeds are stubborn and any herbicide that doesn’t kill weeds to the root often only works as a delaying factor. Glyphosate is a systemic weed killer, meaning it enters the plant through the leaves and kills it completely. Diquat Dibromide only kills portions of the plant it touches, leaving roots unharmed.

While Diquat Dibromide shows results faster, attacking weeds within a week, there is a high chance of these weeds resprouting. Glyphosate kills weeds in 4–20 days, but kills them completely and prevents weed regrowth.

Can You Mix Diquat and Glyphosate?

It is not advisable to mix Diquat Dibromide and Glyphosate. This study showed that by mixing the two compounds, Glyphosate was rendered less effective. The Diquat in the mix essentially “burns” the plants, preventing them from absorbing the Glyphosate chemical. The end result is more weed regrowth than with Glyphosate treatment alone.

Although it may seem that by mixing Diquat Dibromide and Glyphosate you’ll get the best of both worlds—quick results and complete weed death—the truth is you’re better off using Glyphosate alone.

Which is Better: Spectracide or Roundup?

In the battle of home weed killers, Spectracide’s Weed & Grass Killer is often compared to Roundup, but really there’s no competition. Spectracide’s product is Diquat Dibromide-based, while the active ingredient in Roundup is Glyphosate. For better weed control, go with Roundup.

Avoid products with Diquat Dibromide. These weed killers won’t get rid of problems down to the root and will require reapplication. You will save money by using Roundup and applying it once, rather than reapplying a Diquat-based product to battle weed regrowth.

Should You Use Diquat Dibromide or Glyphosate?

Glyphosate is a more effective weed control herbicide than Diquat Dibromide because it kills weeds completely. Diquat Dibromide will not kill weed roots and contributes to recurring weed problems. When using a chemical solution to control weeds, it’s more cost effective and often safer to use a herbicide that only requires one application. This reduces chemical buildup in the soil and limits your exposure to herbicides. For this reason, Glyphosate is the better chemical for weed control. 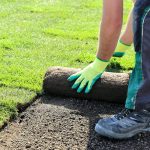