Cucumber plants only tolerate temperatures down to 55℉ (13℃) before their growth starts to falter. On top of that, cucumber seeds will only germinate when soil temperatures are above 65℉ (18℃). Because cucumbers are not cold-tolerant, it’s important to protect them from cold weather and frost. If cold weather is in the forecast, cover your cumbers with row-cover fabric.

How Cold is Too Cold for Cucumbers?

Cucumbers don’t do well in temperatures below 55℉ (13℃). Their growth slows considerably without warm soil and sunlight to help them thrive. If temperatures remain too low, the plant will stop growing altogether, and then die. Temperatures low enough to cause a light frost can easily kill cucumber plants overnight. Even if the plants don’t die, the risk of frost and cold temps leave plants weak and susceptible to diseases, including mildew, wilting, and forms of blight.

Is 40 Degrees Too Cold for Cucumber Plants?

Cucumber plants cannot survive in 40℉ (4℃) temperatures, especially if the weather stays cold for days or weeks. Since it’s still above freezing, the plants will not likely die immediately. Instead, their growth will falter, and then they will start to develop cold injuries. The signs of cold injury on cucumber plants include mottled, wilting, or dead leaves, as well as brown marks on the fruit:

Many cucumber plants cannot recover from serious cold injuries. They will usually struggle to grow at all even after temperatures have risen back into the ideal range. As a result, it’s often best to uproot the cold-damaged cucumbers and try again with new seedings.

What Night Temperature Can Cucumbers Tolerate?

Cucumbers will only tolerate night temperatures down to 55℉ (13℃). If temperatures drop below this point, your cucumber plants will become damaged by cold. If evening temperatures fall too low, the plants may fail to produce buds. A sudden cold snap or overnight frost can even cause cucumbers to lose flowers before they can bloom and set fruit.

Ideally, cucumber plants prefer nighttime temperatures of 60℉ (16℃) or warmer. Temperatures below this point can cause the fruit to turn brown and die before you can harvest it. Any cucumbers that survive these colder temperatures will have a weak flavor and a mushy texture.

Cucumber plants cannot survive frost because they are not cold-tolerant plants. Even short periods of unexpected frost can cause the plants to die seemingly overnight. If the plants end up surviving a late spring frost, they tend to have serious cold injuries to their stems, leaves, and fruit. Cucumbers suffering from frost damage will have brown leaves, shriveled stems, and cracked fruit.

Even if temperatures rise back into the ideal range after a frost, your cucumber plants will continue to decline in the week or so after frost exposure. If you live in an area where spring frosts are common, it may be worthwhile to start cucumber seeds in containers indoors. Once the danger of frost has passed, plant the seedlings in your garden.

How to Cover Cucumber Plants

Your only chance at saving cucumbers from cold weather is by covering the plants before temperatures fall. Driving these hoops into the soil along your cucumber rows makes it easy to cover your cucumbers in an instant.

No matter what frame you’ll use, you will also need a cover material, like garden fabric, plastic sheeting, and even bed sheets. For even more protection, get a couple of frost blankets to add if temperatures drop below freezing. Once you have your supplies in hand, you’ll want to:

Your cucumbers still need light during the day. To ensure they get enough light, put the covers on at night and take them off after the frost burns off in the morning. This system will protect your cucumbers from cold but won’t starve them of sunlight. 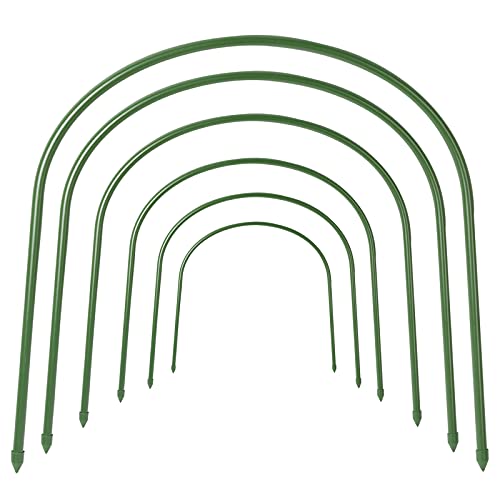 What Temperature is Too Cold for Cucumber Plants?

Cucumber plants need to grow in temperatures above 55℉ (13℃) to stay alive. If you want to see optimal growth, temps in the 70s (21℃) and above are much better. Frigid weather causes a lot of problems for cucumber plants. If it’s too cold, cucumber seeds won’t sprout. If you’ve already managed to grow some sprouts, the cold will damage leaves, stems, blossoms, and fruit.

Cucumbers usually won’t set fruit at all unless temperatures rise to the ideal range. If temperatures stay low, the plants will stay in the vegetative stage and fail to produce any flowers. Without flowers, the plant cannot make any cucumbers, leaving you without a harvest.

In the end, it’s well worth taking the time and effort to cover your cucumber crops during cold weather. Otherwise, you could end up without any fruit to harvest by the end of the growing season. So, watch the temperatures carefully and plan to act fast if cold weather is on its way.