RM43 is more powerful than standard Roundup at killing and preventing weeds. This makes it great for wiping out tough weeds permanently and making sure no plants grow in the area treated with RM43 for up to 12 months.

Roundup kills all species of weeds and grass, like RM43, but Roundup does not prevent new plants from growing in the treated area. This makes Roundup worse than RM43 at stopping weeds permanently, but good for clearing weeds and grass out of areas where you wish to plant something new.

What’s the Difference Between RM43 and Roundup?

RM43 and Roundup are both non-selective herbicides. This means that either product will attack all species of plants they are sprayed on, including weeds, grass, ornamentals, vegetables, and trees. RM43 combines Glyphosate (the active ingredient in Roundup) with Imazapyr. This allows RM43 to be more effective as both a weed killer and preventer.

The key difference between the two is the inclusion of Imazapyr in the RM43 formula. Roundup functions solely as a post-emergent herbicide, meaning it kills existing vegetation down to the root. RM43 performs this task, plus it works as a pre-emergent. Any sod, plants, or seeds that try to take root in-ground treated by RM43 within 12 months of application will die.

What is the Best Use for RM43?

RM43 is great for clearing areas where you do not want any plants to grow within the next 12 months, while being rainproof quickly. Some examples of ideal applications for RM43 are:

Think of RM43 as a permanent option. If you are certain you don’t want any plants to grow in the area for the next year, use RM43 instead of Roundup. Do not use RM43 to spot treat weeds in your lawn, as it will render the spot bare for up to a year.

What is the Best Use for Roundup?

Roundup is ideal for use when you want to kill pest plants and grasses to the root, but you plan to reseed or plant the area once it is cleared of weeds. The ideal uses for Roundup are:

Roundup is remarkable for its ability to kill all varieties of plants and grasses without poisoning an area. You can plant new grass, seed, or garden plants as little as 3 days after treating an area with Roundup. If you want to get rid of weeds and grass to make way for something new, Roundup is a better product than RM43.

Which is Better: RM43 or Roundup?

Before you buy, it’s important to know which product performs better in the field. Below, we’ll be comparing the following two products:

Some varieties of Roundup contain additional ingredients for long-term weed control, but for this comparison, we will put RM43 head-to-head against the most common Roundup product.

Because both RM43 and Roundup contain Glyphosate, both take about 7–14 days to kill weeds. Although you will begin to see results 2–48 hours after application, it takes up to 2 weeks for Glyphosate-based weed killers to kill a plant down to the roots.

This is a tie between RM43 and Roundup because they are closely related, seeing as both contain Glyphosate as a key ingredient.

RM43 is much better at keeping areas weed-free for a long time period than Roundup. This is because RM43 contains Imazapyr, which remains in the ground for up to 12 months, killing any weed and grass seeds that attempt to sprout.

For stopping weeds permanently, RM43 is the clear choice. With one application of RM43, you can wipe out weeds growing through concrete and keep them from coming back for an entire year. 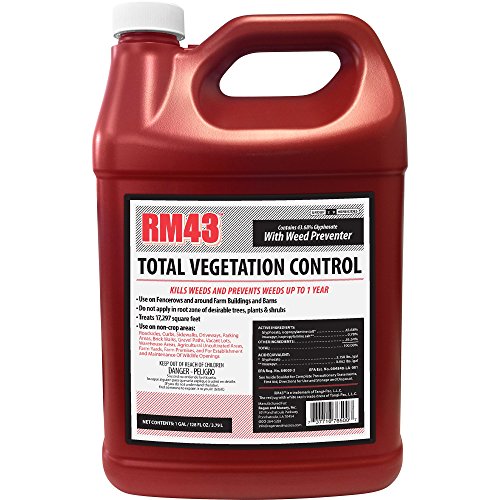 Is RM43 Stronger than Roundup?

RM43 is stronger than Roundup because it contains 2 powerful active ingredients: Glyphosate and Imazapyr. Roundup only has Glyphosate. This means RM43 kills a broader range of plants more effectively.

For tough weeds, sedge, poison ivy, and brush, RM43 will be more effective than Roundup. Think of RM43 as Roundup with extra firepower, thanks to the inclusion of Imazapyr.

Is RM43 Safer Than Roundup?

RM43 requires more care when applying than Roundup. This is because RM43 is residual in the soil. The herbicide is prone to “drifting” over time, due to water runoff. As the RM43 leaches from one area to another, it will kill new plants and grass it comes into contact with, as it is absorbed by the plant roots.

This is an important note to keep in mind when using RM43. The extra firepower comes at a cost—you could put nearby desirable plants in danger. Roundup will not attack nearby plants after entering the target weeds.

Should You Use RM43 or Roundup?

If you want to permanently clear vegetation and grass from an area, use RM43. It kills all species of plants and grass and prevents new plant growth in the area for 12 months. This makes it a great solution for clearing weeds out of gravel, pavers, fence rows, or concrete.

Roundup kills weeds and grass down to the root but does not stop new plants from growing. If you want to plant a garden or spread grass seed in your lawn once you’ve gotten rid of the unwanted plants, use Roundup. 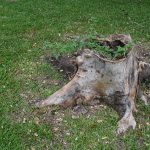 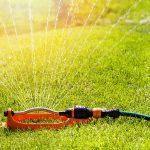