French drains are long trenches that collect groundwater and runoff over a wide area and channel it downhill. They are best for drying out boggy ground near a foundation or controlling runoff from a hillside. Catch basins are grates set in a low area that collect rainfall and surface water, channeling it into a drain pipe. Catch basins are excellent for managing heavy rainfall on your property. You can combine French drains and catch basins to make a very effective drainage system that manages stormwater, roof runoff, and keeps your yard well-drained.

What is the Difference Between a French Drain and a Catch Basin?

A French drain is a long trench that contains gravel and a perforated pipe. Water can enter from the ground or flow into the trench from above. Once in the trench, the water will percolate through the rock, enter the pipe perforations, and flow downhill. In contrast, a catch basin is a box in the ground with a grate on top. It accepts water only through this top grate and then directs it into a drainage pipe.

A French drain is designed to control regular amounts of water across a wide area, or around a foundation. Meanwhile, a catch basin is meant to capture large amounts of stormwater and channel it quickly away to prevent flooding.

What is a French Drain?

A French drain is simply a drainage trench with a perforated pipe laid in it. What makes it special are the perforations (holes) in the drain pipe. Unlike a typical solid drain pipe that only accepts water at the top end and conducts it directly to the exit, water can enter a French drain at any point through the perforations in the pipe. Water in the drainage trench flows into the pipe through the holes and races downhill.

This is a quick and simple explanation of a French drain. For proper French drain installation, a properly sloped trench must be dug, lined with gravel, and a perforated pipe must be installed and protected with landscape fabric.

What is a Catch Basin?

A catch basin is a plastic or concrete box with a grate at the top and an outlet where a drain pipe can be attached. The catch basin is installed by burying it in the soil so that only the grate is visible. Surface water flows into the grate and then is directed through the drainpipe attached to the catch basin.

Catch basins are extremely useful in a drainage system because the box set into the ground collects sediment. Dirt and debris sink to the bottom of the catch basin. This way, only the clean runoff water enters your drain pipe. This keeps your drainage system from clogs and damage.

When is a French Drain the Best Choice?

Because French drains are most adept at controlling groundwater that results from excessive precipitation in a wide area, they are great for drying out soggy ground over a large expanse. However, it is important to note that large storms and an excess of stormwater can flood a French drain. Because the water has to percolate into the trench drain, up through the gravel, and enter the perforations in the pipe, a French drain works relatively slowly.

When is a Catch Basin the Best Choice?

Catch basins are made for managing the large volumes of runoff and surface water that French drains struggle with. Do you have a low spot in your yard that floods whenever it rains? Install a catch basin there, attach it to a drainage pipe, and watch that flooding issue disappear. The best uses for catch basins are:

If you have gutter downspouts that drain large volumes of water into your yard, flooding it, a catch basin installed below the downspout exit is a great option. Catch basins are perfectly suited for dealing with large volumes of surface water quickly. A catch basin is sometimes referred to as a surface drain because it works to control surface water. This is in contrast to how French drains work because they are a type of trench drain designed to control groundwater.

Can You Combine French Drains and Catch Basins?

This combination of French drain and catch basin is ideal for locations where rainfall can continue for long periods of time. Extended rainfall in areas such as Pacific Northwest, or in coastal regions beset by storms, causes flooding through both saturating the soil with water and flooding the surface. A combination of French drains and catch basins manages both these occurrences.

Does a French Drain Need a Catch Basin?

Not all French drains require catch basins or another surface drain. If you live in a region with moderate rainfall, an area where storm systems are uncommon, or your yard doesn’t experience heavy surface flooding, you can install a standalone French drain. For instance, if you want to stop water from running down a hill and undermining a retaining wall, usually a French drain is sufficient on its own.

Can You Install a Catch Basin Without a French Drain?

A catch basin must be attached to a drain pipe of some sort. However, it doesn’t have to be a French drain. You can install a catch basin beneath gutter downspouts and then use a solid drain pipe to direct the water downhill to a dry well or another drainage endpoint.

Although catch basins pair well with French drains for controlling heavy flooding and storm runoff, there is no design requirement that your catch basin must attach to a French drain.

Should You Install a French Drain or a Catch Basin?

If you are trying to control moderate amounts of runoff and groundwater over a large area, install a French drain. To drain large amounts of runoff or surface area from a low spot in your yard, install a catch basin. However, this isn’t an either-or proposition. You can create a drainage system where your catch basin flows into a French drain. This hybrid system will both collect heavy rainwater and keep wide areas of your yard from flooding. Used in combination, French drains and catch basins can solve a wide variety of drainage issues. 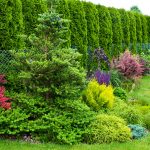 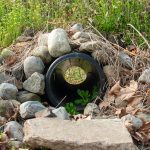