Yes, you can fertilize on top of mulch, but the amount of success you have depends on the type of mulch you have in place and how fast it decomposes, as well as the fertilizer you’re using.

How to Fertilize on Top of Mulch

Timing is essential when applying fertilizer on top of mulch. If you’re using a fast-decomposing mulch, such as straw, grass clippings, or cocoa hulls, then you will typically need to reapply mulch each spring. Fertilizing before adding new mulch is a great idea because at this point most of the mulch in your garden will have broken down. You can fertilize, then add a layer of mulch with little fuss.

If you have a slow-decomposing mulch, such as bark mulch or nutshells, it may be more difficult to add fertilizer over mulch. This requires selecting a liquid fertilizer that works best at penetrating mulch and helping plants grow.

The best practice for fertilizing in a garden with wood chips is to remove the mulch first, or at least rake mulch away from the base of plants before fertilizing. This will yield the best results and deliver the highest amount of fertilizer to your plants.

In large gardens, it may not be feasible to remove or rake aside mulch to apply fertilizer. If you must fertilize through wood chips, remember the following:

Does Mulch Fertilize the Ground and Soil?

Mulches gradually fertilize the ground as they break down. Think of mulch as a thin layer of material that slowly turns into compost.

Over time, mulches will break down and add nutrients to the soil, which is generally very good. However, mulches with chemicals in them (as in some commercial wood mulches) or acidic mulches (such as pine needles) also could potentially add these qualities to the soil. So, be careful when choosing your mulch.

Does Mulch Tie up Nitrogen in the Soil?

Don’t believe the myth that mulch reduces nitrogen in the soil. This is completely untrue. As mulches break down, including wood and bark mulch, they actually add more nitrogen to the soil.

The myth that mulches steal nitrogen is common and still used by some to convince gardeners to add extra fertilizer after mulching. Mulch will not suck nutrients out of your soil. The worst that can happen is that some of your liquid fertilizer may be soaked up by mulch, which is why it’s best to rake mulch aside when fertilizing.

Can You Add Compost on Top of Mulch?

As with any fertilizer, it’s best to add compost and/or compost tea directly to the soil. This allows for the quickest and most powerful impact. However, there are some cases where you can add compost on top of mulch.

Fertilizing on Top of Mulch

It’s best to apply fertilizer on top of mulch only when there is ½ inch or less of mulch. In areas with thick mulch, the best practice is to rake mulch away and apply your fertilizer or organic fertilizer of choice directly to the soil. 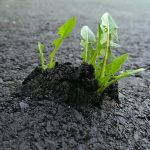 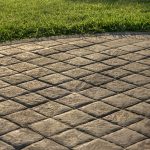