What Stops Weeds From Growing?

The Andersons Barricade Granular Pre-Emergent Weed Control | Professional-Grade | Trusted by Top Professionals
Buy Now
We earn a commission if you click this link and make a purchase at no additional cost to you.

If you aren’t concerned about saving grass or plants in a weedy area, you can permanently kill weeds with a powerful post-emergent herbicide. These sprays kill all the plants they touch. Plus, they linger in the soil to prevent new weeds from sprouting for up to 1 year.

Roundup Concentrate Max Control 365 Vegetation Killer, 32 oz. (Not Sold in NY)
Buy Now
Check Home Depot
We earn a commission if you click this link and make a purchase at no additional cost to you.

Vinegar does not kill weeds permanently. If you treat weeds with a mixture including vinegar, you will only damage weeds for a short period of time. This is because the acetic acid in vinegar burns the leaves of weeds but is neutralized by the soil. This means that the roots of the weeds will be unharmed. The damage to the leaves of weeds may make you think you’ve done the job, but the weeds will regrow from the roots.

If you want to kill weeds permanently, you need to pull them up by the roots or use a systemic herbicide. Removing a weed by the roots prevents it from growing back. Systemic herbicides work by infiltrating the plant and killing it to the root. Both these options are several times more effective than homemade weed killer made with white vinegar.

How to Permanently Stop Weeds from Growing in Grass

There are several herbicides that are safe for use on grass. These herbicides will kill almost all types of weeds—including hardy perennial weeds and grassy weeds—without harming your lawn. While vinegar-based weed killers will damage grass and weeds at the same time, selective herbicides kill weeds but don’t harm grass.

Although these weed killers are designed to ignore grass, they can’t differentiate between weeds and garden plants. A post-emergent herbicide should never be sprayed in your garden. It is likely to kill your desirable plants. 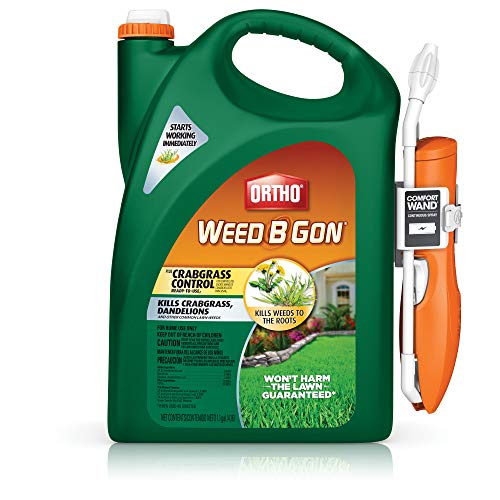 Use Pre-emergent to Stop New Weeds from Sprouting

If you want to stop weeds from growing in your lawn permanently, your best option is to begin spreading pre-emergent at the proper time in spring and fall. Pre-emergent herbicides enter the soil and remain there for weeks or months. During this time, any weed seeds that attempt to sprout will be killed before the sprout breaks the soil surface.

The best thing about pre-emergent herbicide is that it doesn’t harm any actively growing plants. Your lawn grass will be unaffected. Only new seeds that attempt to sprout will be killed. By spreading pre-emergent on your lawn twice per year, you’ll stop weeds from ever growing in your lawn.

How to Permanently Stop Weeds in Your Garden

Although it’s an excellent idea to use pre-emergent in your garden since it will kill garden weed seeds as they sprout, there is one drawback. Pre-emergent won’t kill actively growing plants. This means it won’t harm your veggies, but it also won’t kill weeds that have already sprouted. You’ll have to pull mature weeds out of your flower beds. Then, use pre-emergent to permanently prevent weeds from returning.

How to Permanently Stop Weeds in Concrete Seams

If you are trying to kill unwanted grass or a troublesome growth of weeds between concrete pavers, bricks, or any other place where you don’t want any plants to grow, use a powerful weed killer. A strong systemic herbicide will kill all types of weeds down to the root. It is also formulated to remain in the soil for up to 12 months, stopping any new plants from sprouting.

This type of herbicide is a combination of post-emergent and pre-emergent. However, it is extremely powerful and will kill any plant it comes in contact with. Use it only in areas where you are certain you want no plants to grow for 12 months.

How Do You Permanently Get Rid of Weeds in a Gravel Driveway?

Natural weed killers that include vinegar won’t permanently kill weeds in gravel. Get rid of these unwanted plants with the same hybrid herbicide used for killing weeds growing through concrete. This type of effective weed killer will wipe out weeds in gravel and stop them from returning.

Don’t use a homemade weed killer with table salt on your gravel driveway. Unlike specially designed, long-lasting weed killers, salt is easily spread to other parts of your yard by water runoff. Wherever you spread salt, it can be washed into other areas. This will create dead zones in your lawn where no grass or plants will grow.

How Do You Permanently Stop Weeds from Growing?

In order to kill weeds down to the root and permanently stop them from returning, use the following methods:

By following these rules, you’ll have a permanent solution for weed problems throughout your yard.